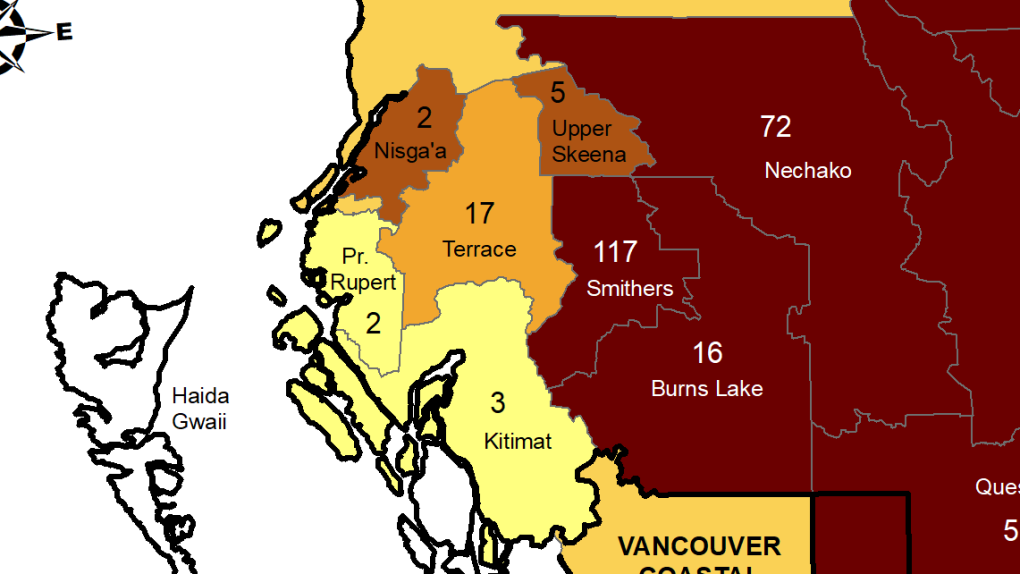 From Sept. 5th to 11th, 117 new cases were reported in the Smithers Local Health Area, which also includes Houston, Witset and Telkwa.

Other parts of the Northwest east of Smithers are also struggling with the virus. Nechako saw another high weekly case count with 72 new cases, while Burns Lake had 16.

Prince Rupert, Nisga'a and the Far North reported two new cases each. No new cases were found on Haida Gwaii.

These numbers make it all the more clear that the regions in the Northwest that are struggling the most with the virus are also the ones with the lowest vaccination rates.

In Smithers, just 73 per cent of eligible residents have received their first dose of a COVID-19 vaccine and 62 per cent have had their second.

Moving west, around four-fifths of residents in Terrace, Upper Skeena and the far north have received their first dose.

For second doses, Terrace and the Far north are at 70 per cent, while Upper Skeena is at 68 per cent.

For Prince Rupert, Haida Gwaii and Nisga'a, first-dose rates are around 85 per cent.

For second dose rates, Haida Gwaii is at 78 per cent, while Nisga'a is at 74 per cent and Prince Rupert is at 73 per cent.

"I would urge people to trust our medical system.”

Although she said she’s only able to speculate about what’s caused the recent increase, she noted that there’s been some bigger events in town lately and she’s heard anecdotally of people gathering in larger numbers.

Atrill says she knows people are tired, but they still have to do the right thing and follow the health protocols or else the hospitals could be strained.

“I just think it's the time for all of us to pay really high, strict attention to the rules that we all know. Make sure you're staying home if you don't feel well, and I think that really is a big one,” she said.

“I was speaking to a physician the other day who said, people have forgotten what that means. So if you don't feel well, it actually means just stay home – not going shopping, not visiting your friends not doing any of those things. Like, go back to the sort of strict regimens we were all practicing near the beginning of the pandemic.”

The Smithers Local Health area has struggled with low vaccination rates, and protests have been held outside the Bulkley Valley District Hospital this month in opposition to vaccine mandates.

Atrill says that anyone who’s uncertain about COVID-19 vaccines should reach out to the medical professionals if they want more information.

“I would urge people to trust our medical system. It has worked for us. There's no reason to suspect that people are trying to hurt us in that system. I don't have any history of that – when we get sick, we go to our doctors. There's no reason not to trust what's going on, so I would urge people to really consider that. If you have questions, go see a physician. Talk to someone who can give you really good information,” she said.

“And for those of us that are feeling like the Health Authority is doing a good job, let's share that message and stand up for people who are trying to do the right thing.”

The vaccination rates for the Smithers Local Health area also vary throughout the region. Smithers Town Centre is at 79 per cent for first doses, Smithers Rural is at 68 per cent and Houston is at 71 per cent.