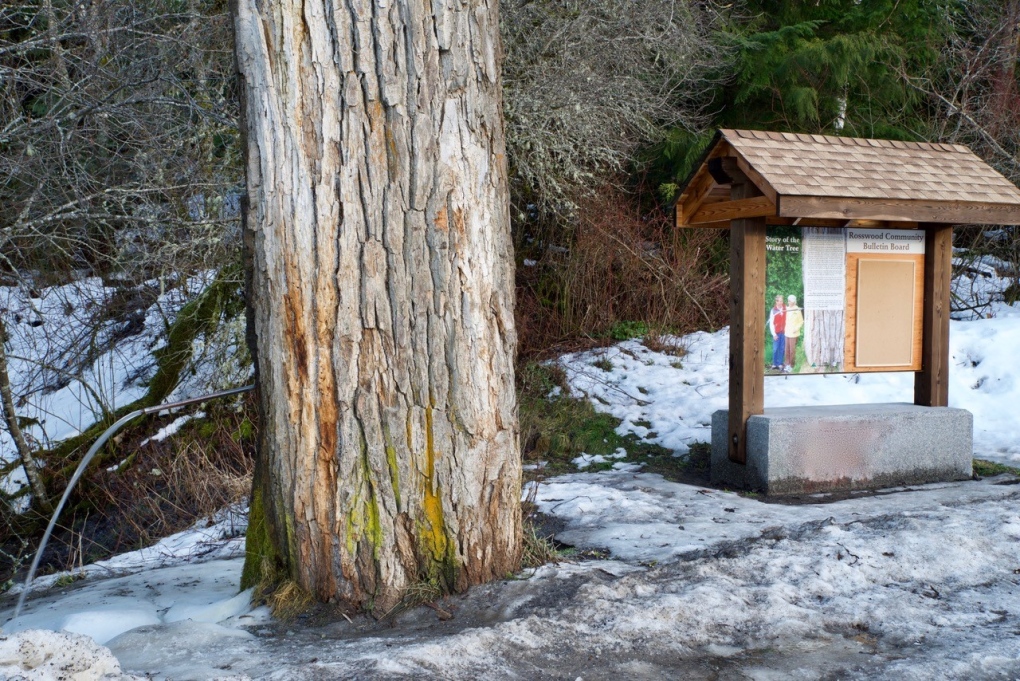 Don Parmenter created a water-collecting hot spot nearly 50 years ago, which has served the Rosswood community well for their freshwater needs.

In 1971, Don and his wife Louise acquired property at the north end of Kalum Lake in Rosswood. While exploring the area, the duo came across a spring beside Dry Creek. Don piped the water from the clear spring down to a large cottonwood tree beside Kalum Lake Road.

“They did this really tricky job of putting in a long pipe under the ground and drilling a hole up the big cottonwood tree,” says Betty Geier, Director of The Rosswood Community Association. “The tree automatically discharges water for your convenience and you don't have to turn it on or off.”

Those who have frequented the hidden water spot refer to it as either “The Water Tree” or “The Peeing Tree”. After a few months, the Parmenters noticed that people were hauling water from the tree in everything from thermoses to three hundred gallon tanks.

In an excerpt from an interview that Geier had with the couple, Louise mentioned that the community immediately took a liking to the tree, some even using it as a shower.

“We had no idea that a lot of families didn’t have water in their house! Or at least, a well. We supposed people had dug wells, but you have to go pretty deep there to get a well. You start digging a well and you never know whether you will find a good source of water or not. So almost everybody started using the tree,” said Louise.

“Then one of the local women came down, and washed her hair. She had lovely long hair. And how could anybody stand that icy water on the back of their neck? Lots of tough people in Rosswood at that time.”

Geier says tourists are pleasantly surprised to come across “The Water Tree” during their drive through Rosswood.

“I’ve known of at least one person who was doing a tour across Canada, looking at similar wonderful sites all over the country. They were very happy to come upon our lovely tree.”

Later on, The Department of Highways made a parking lot for the convenience of water users. Because of this, “The Peeing Tree” is now a welcoming tourist spot.

Now at the age of 100, Don Parmenter still quotes this as “the best water in the world.”

Another local Rosswood hidden gem is the general store off of Kalum Lake Road, just minutes down the road from the tree. Geier says the store has been serving the community well over the years, even providing goods that can’t be found anywhere else.

“The products that we have here are often not found anywhere outside of Vancouver. A lot of local residents prefer things that they can't just ordinarily get in a regular grocery store.”