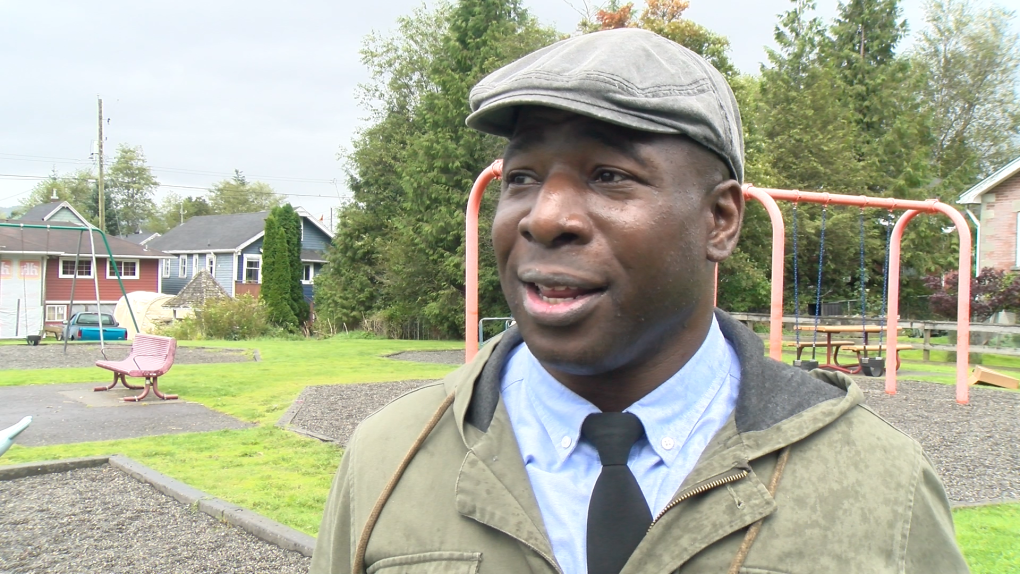 Hakeem Lawal is accusing the RCMP of racial discrimination after he was pulled over and questioned for slowing down while passing a police car. (Photo source: Joshua Azizi/CFTK).

PRINCE RUPERT, B.C. -- A Black man from Prince Rupert organized a protest across from the city’s RCMP building on Saturday after experiencing what he alleges was a racially-motivated police stop on August 1st.

Hakeem Lawal says he was driving home from his job at the Port of Prince Rupert when a police car’s lights began to flash behind him.

“I was heading towards my house, actually, so I pulled into my driveway and two officers approached me. They didn't identify themselves, and they began to ask me for my license and registration, and I didn't see any reason for me to have that stop. I was going to speed limit, I was obeying all the laws – it was the middle of the night, so it was kind of iffy to begin with,” he said.

When Lawal asked the officers why they pulled him over, he says they told him it was because he slowed down while driving past their vehicle.

“That’s not a crime. I was already going under the speed limit.”

He says when he questioned if the incident was about race, the officers quickly returned his belongings and left.

“The officer was very abrupt with me – wasn’t friendly or courteous in the least bit. When I challenged her and said “this is about racism,” they didn't deny it. They didn't say, “no, this isn't about racism, I'm sorry sir if you feel that way.’ There was no conversation beyond that. It looked like they got caught being racist and wanted to get out of there as quickly as possible,” he said.

“That's what really made me think that, yes, this is a racially-motivated incident. It was the middle of the night. They had no other reason for stopping me except for the color of my skin.”

He says the incident has inspired him to speak up and organize the protest.

Other concerns with the RCMP are on his mind as well, including the use of no-knock raids on people’s homes to execute search warrants, as well as alleged police inaction regarding missing and murdered Indigenous women and girls.

“It's upsetting to know that there are so many missing Indigenous women and girls and that the cases are being stalled or left cold.”

After the incident, Lewal filed a report with the RCMP Civilian Complaints Commission, as well as a personal complaint at the Prince Rupert RCMP detachment.

Lawal’s protest on Saturday may have been small, but he’s happy with how it turned out.

“We got a good positive response from most people. [There were] people driving along the highway honking and showing their support. I think that we’ve made a real difference here today.”