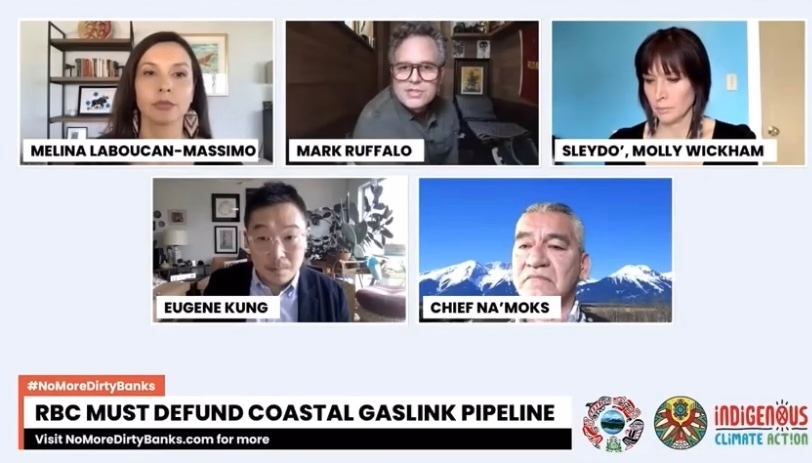 The "No More Dirty Banks" campaign asks City National Bank's Parent Company, Royal Bank of Canada, to withdraw their funding from Coastal GasLink, a 416-mile gas pipeline that will cut through sacred and sensitive ecosystems in Wet’suwet’en land, in British Columbia.

In a video posted on the campaign’s website, actor and activist Mark Ruffalo voiced his concerns about the project.

“The Wet’suwet’en hereditary chiefs never consented to this pipeline being constructed through their territories, which would risk the scared headwaters of Wedzin Kwa River.”

“CNB and RBC have the opportunity to stand on the right side of history, and that starts with immediately divesting from Coastal GasLink,” Ruffalo added. “I’m heartened not only by the power of Wet’suwet’en land defenders, but also by my community of artists rising up to demand an end to all fossil fuel finance as we live through this climate catastrophe.”

“I am a man who believes in hope of action and the decency of people to do the right thing,” said Ruffalo during the press event.

In addition to Mark Ruffalo, other notable signatories include Scarlett Johansson, Jane Fonda, Robert Downey Jr., Leonardo DiCaprio, Amy Schumer and Joaquin Phoenix among others who are allegedly CNB’s clients.

Today’s letter comes after a February 25 landmark meeting between Wet’suwet’en Hereditary Chiefs and CNB and RBC executives, where the Chiefs issued formal demands.

Since acquiring CNB in 2015, RBC has doubled down on fossil fuel financing, and is the world’s fifth largest fossil bank and Canada’s #1 fossil fuel financer. With an estimated CAD $6.6 billion price tag, RBC is among top commercial banks providing the CGL project with working capital.

“Bankrolling Coastal GasLink is just the latest example of RBC covering up their role in violating Indigenous rights, not upholding free, prior and informed consent as outlined in UNDRIP, and in exacerbating the climate crisis. In my community, we can’t drink our water because of RBC’s investments. We want to make sure Wet’suwet’en communities still can,” said Melina Laboucan-Massimo, Senior Director of Indigenous Climate Action.

Representatives for Royal Bank of Canada declined to comment at this time.

Calgary-based TC Energy was selected by LNG Canada in 2011 to design, build, own and operate CGL. The 670-kilometre-long pipeline is being built to deliver natural gas from the Dawson Creek area to an LNG Canada facility in Kitimat.

In an email statement, TC Energy expressed their concerns about information not being circulated to groups and individuals who are concerned about Indigenous rights and climate change issues. The statement reads, “Since the beginning of the Project, Coastal GasLink has sought to engage and consult with the Wet’suwet’en Houses through the Office of the Wet’suwet’en and the elected leadership. We want to listen and seek meaningful ways to address interests and concerns including ensuring the pipeline is built under the Morice River using the safest technology available. Coastal GasLink is committed to engaging with the Hereditary Chiefs and we would encourage those interested and concerned with this complex situation to build further understanding by reading a statement authored by members of the Gidimt’en Clan and released by Wet’suwet’en First Nation council. “

“For many of us, this marks the first time that our Nations have been included as owners in a major natural resource project that is crossing our territories,” said Chief Corrina Leween of the Cheslatta Carrier Nation, member of the CGL First Nations Limited Partnership.

Organizers, celebrities, and communities are gearing up to take action in Los Angeles this Friday, March 18, and across North America around RBC’s annual shareholder meeting on April 7, expected to take place both virtually and in-person in Toronto.