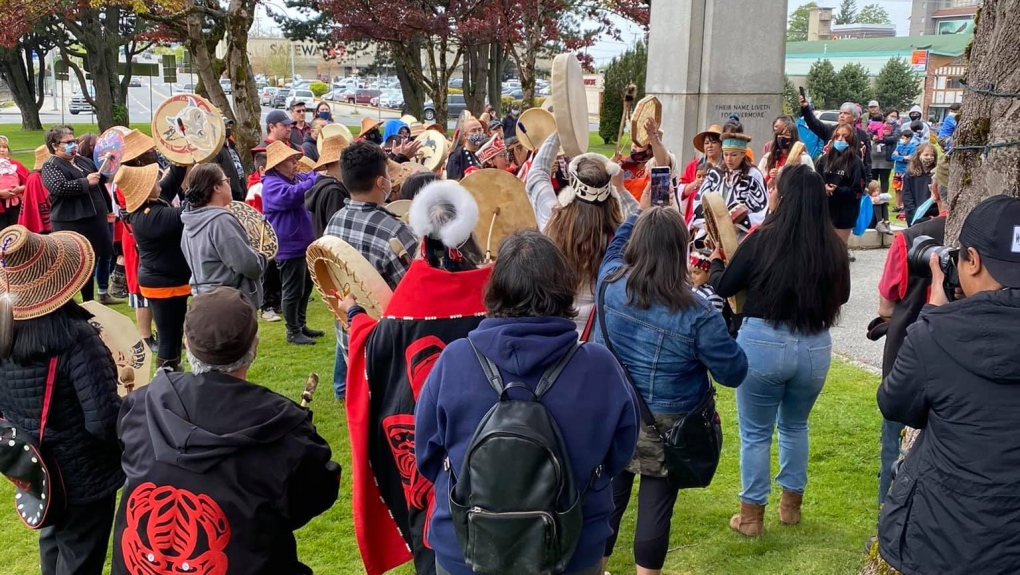 Attendees at the ceremony held outside the Prince Rupert courthouse on May 30th, 2021 to remember the children who died at Kamloops Residential School. (Photo source: James W. Brown -- Facebook).

PRINCE RUPERT, B.C. -- People across Canada are continuing to grieve after last week's discovery of the remains of 215 First Nations children buried at the Kamloops Residential School.

In Northwest B.C., Indigenous people and allies alike came out to pay their respects to the children.

On Sunday night in Terrace, the Tears to Hope Society organized a march from the Kitsumkalum Boat Launch to the totem pole along Highway 16, where some people gave speeches.

Speaking at the event, Debbie Moore from the Kitselas First Nation said it's important to listen to the stories of residential school survivors in Terrace and all across Canada.

"There was one young man, younger than me, who went to Alert Bay and was put in a box in a basement for six weeks; who was left to lay there in everything," she said. "They would put his food through a little latch. Sometimes he would put his hand in there and it would be crawling with maggots."

Over in Prince Rupert, people gathered outside the courthouse yesterday to pay tribute to the children, and some left gifts for them on the steps of the cenotaph.

The event was co-organized by Garry Wells, who leads the Lax Kw'alaams drumming group Amago’ot Gyetm Maaxii, which translates into "One Heart, People of the Rainbow."

Wells also noted that his parents and two of his siblings are residential school survivors.

Port Edward councillor James Brown attended the event in Prince Rupert. He said you could feel the sadness in the air.

“It really hits hard because my mother is a residential school survivor," he said. "She finally came out with over last couple of years what she endured, as in beatings. To hear it again, I bet it's affected her because she still grieves, and she's still affected by it.”

Brown said he asked his fellow councillors if they could lower the Port Edward flag in remembrance of the children, which they did today.

Many other municipalities throughout the Northwest are also flying their flags at half-mast, including Terrace, Prince Rupert, Smithers and Houston.