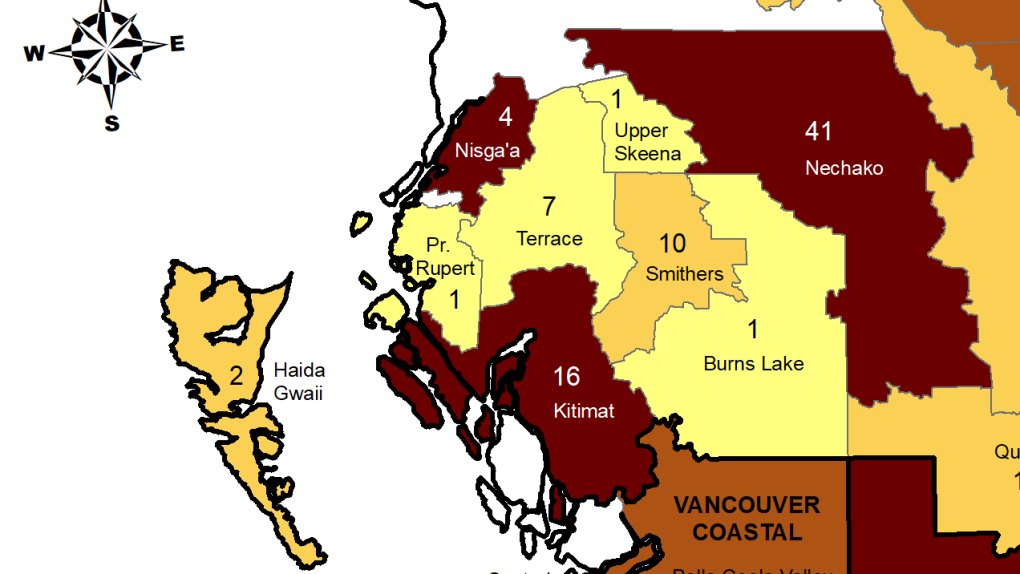 PRINCE RUPERT, B.C. -- Weekly COVID-19 case counts are continuing to rise across the Northwest, according to the BC Centre for Disease Control.

Along the coast, 16 new cases of the virus were reported in Kitimat from August 15th to 21st.

Four cases were reported in Nisga'a, two on Haida Gwaii and one in Prince Rupert.

Moving inland, 10 new cases of the virus were reported in Smithers.

There were also 7 new cases in Terrace, one in Upper Skeena and one in Burns Lake.

There were no new cases in the Snow Country - Stikine - Telegraph Creek region.

Out of these 10 Local Health Areas, seven reported higher counts of new cases compared to the previous reporting period.

Prince Rupert and Nisga’a are at 82 and 83 per cent for first doses, respectively, but both have second-dose rates of 70 per cent.

77 per cent of eligible Terrace residents and 78 percent of Upper Skeena residents have had their first dose, but just two-thirds of eligible residents in each region have had a second dose.

80 per cent of people in the Snow Country – Stikine – Telegraph Creek region have had their first shot, but only 62 per cent have gotten a second shot.

Rates continue to remain low in the Bulkley-Nechako area. For first doses, Smithers is at 69 per cent. Burns Lake is at 68 per cent, while Nechako is at 64 per cent.

Of these regions, Burns Lake has the highest second-dose rate, with 60 per cent of eligible residents being fully vaccinated.