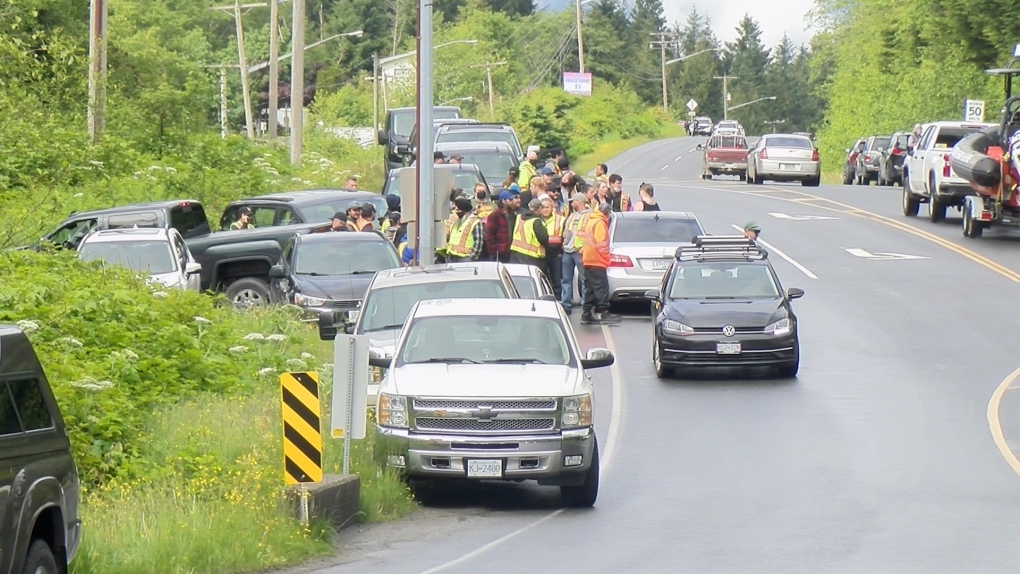 Longshore workers for the DP World Fairview Container Terminal on June 16th, 2021, refusing to cross a picket line set up by pro-Palestinian activists.

PRINCE RUPERT, B.C. -- UPDATE: The unpaid suspension was later reduced to one day.

94 longshore workers at DP World's Fairview Container Terminal have been suspended without pay for four days after they refused to cross a picket line set up last week that aimed to discourage workers from docking the Israeli-owned Volans container ship.

CFTK-TV News has obtained a letter written by DP World Yard and Gate Manager Ian Robertson that outlines the details of the suspension.

In the letter, Robertson says DP World investigated the demonstrations that were held near the container terminal on June 15th and 16th and determined that 94 employees refused to show up for work on these dates.

"This refusal was in support of the demonstrators and continued after the employees were informed to report to work," he said.

"The actions of the 94 individuals constituted an illegal work refusal contrary to Article 7.01 of the Collective Agreement and the requirements of the Canada Labour Code. All 94 individuals will receive unpaid suspension from all work at the Terminal effective from June 22, 2021 at 16:30 to June 25, 2021, both dates inclusive, and the incident will be noted in each of their respective personnel files."

The protestors' campaign was connected to the Block the Boat movement, which had managed to prevent the Volans container ship from docking in Oakland earlier this month. The movement sought to prevent the docking of the ship as a response to Israel's actions and policies towards the occupied Palestinian territories.

Although the demonstration did manage to delay the docking of the Volans ship, it was successfully moored at the Fairview Container Terminal on June 16th.

Robertson also wrote DP World and its customers experienced harm as a result of the longshore workers' refusal to work.

"We are currently estimating the scope of these damages, but hereby put the union on notice that we intend to cover damages from those involved," he wrote.

"Should any additional reports of misconduct occur, the employees named in the attached shall be subject to further discipline, up to and including deregistration."

CFTK-TV News reached out to DP World and the Prince Rupert Port Authority for comment but has so far not received a response.

The International Longshore Workers Union Local 505, which represents the longshore workers at the Fairview Container Terminal, declined to comment.