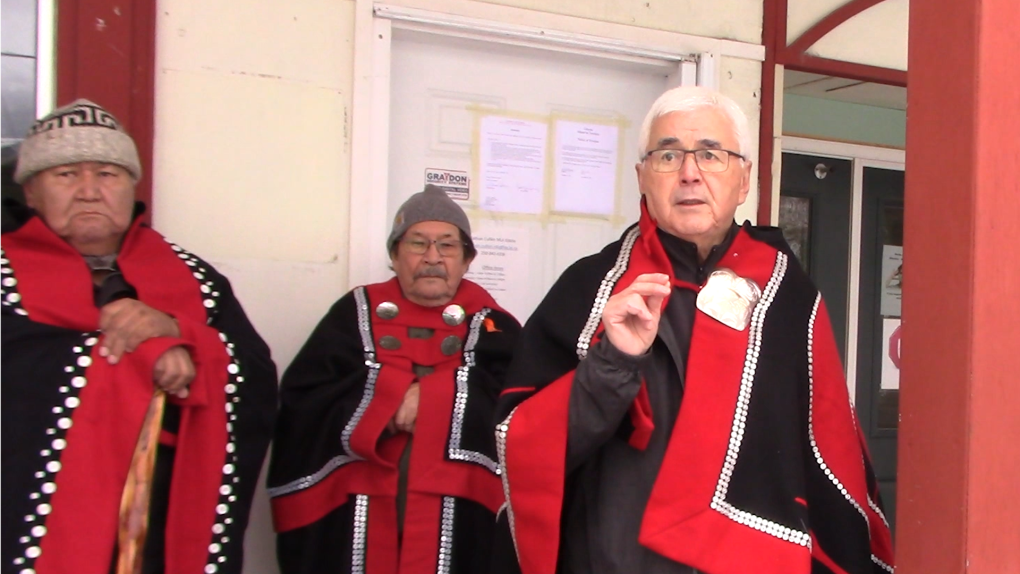 The notice, which was posted on the door of his constituency office in Hazelton, says Cullen has been evicted from Gitxsan territory and that he will be considered a trespasser if he enters the area.

“Nathan Cullen is playing the middle road, and it’s all empty words,” said hereditary chief Larry Skulsh in a video recording of the eviction notice being posted.

“It’s all we hear. Same thing with Trudeau and John Horgan – empty words. I don’t even think they know what the word ‘reconciliation’ means.”

The eviction notice alleges Cullen failed to ensure the safety of his constituents from what it describes as “the violence and excessive force used by overly armed RCMP at or near Houston, BC and New Hazelton BC during the months of October and November 2021.”

It’s a reference to the recent arrests of 29 Wet’suwet’en pipeline opponents near Houston by militarized police officers as well as police presence at an ongoing rail blockade in New Hazelton. In both areas, officers have been seen carrying large guns, Police also arrested Git'luuhl'um'hetxwit Wilp member Denzel Sutherland-Wilson at the New Hazelton rail blockade, who called out “I can’t breathe” as three officers held him to the ground and arrested him.

“It's just a split second for one person to make a wrong move, and that officer will pull that trigger. So we do not want any more bodies coming that we have to deal with as hereditary chiefs.”

The chiefs also say Cullen hasn’t properly represented the causes and concerns of the Gitxsan and Wet’suwet’en people.

Sebastian says the chiefs recently requested a meeting with Cullen to talk about some of their concerns regarding not only the RCMP but also with the quality of health care in Hazelton. He says when people in the Upper Skeena get sick, they get shuffled between hospitals in the province.

“Our people spend most of their time in the ambulance service and not under doctors’ care. So they’re sent to the various hospitals across the province because we do not have a sufficient hospital here. We need a brand new hospital. Even if they build one in Terrace, we still have to travel an hour and a half.”

However, he says Cullen declined the meeting.

“We said to Mr. Cullen: ‘Come and meet with us. We do not want to have any more bodies coming to us. We have enough coming to us from this COVID, and do not add to the problem.’ And then he tells us he does not want to be seen to be picking sides. Well, Mr. Cullen, you're evicted.”

Sebastian says that after the eviction notice was posted, he reached out to the Gitxsan chiefs to organize a meeting. He says the chiefs are willing to meet with him in Smithers, but the Wet’suwet’en hereditary chiefs must approve the meeting first.

Nathan Cullen could not be reached for comment on this story. In an emailed statement, a communications officer with the BC NDP caucus says Cullen has been in meetings and conversations with Gitxsan leadership discussing the matter and is unable to provide further comment as these conversations unfold.

Cullen made a brief post about the matter on social media as well.

“I would like to thank [Gitxsan hereditary chief] Nikot’een and her supporters for the good conversation this afternoon about recent, difficult events that have taken place recently on her territory. I look forward to meeting with her and other Gitxsan chiefs in the coming days.”