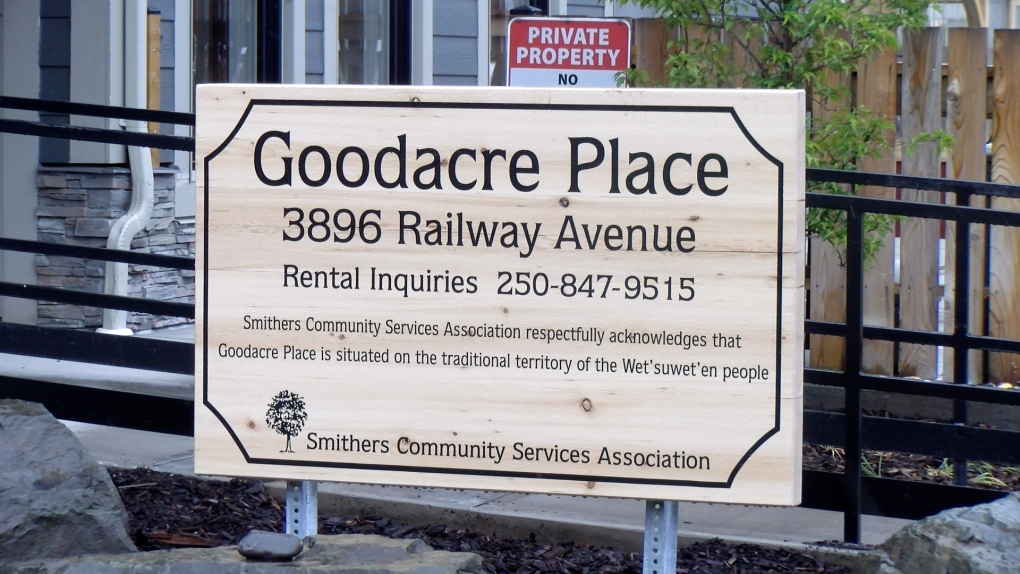 The sign outside the Goodacre Place supportive housing facility in Smithers. (Joshua Azizi/CFTK).

BC Housing's review of the Goodacre Place supportive housing facility in Smithers says it did not observe a linkage between the building's cultural programming and the deaths of six Indigenous men within a year in the building.

The investigation began after the Dze L'Kant Friendship Centre and BC Association of Aboriginal Friendship Centres (BCAAFC) put out a press release in April 2021 that alleged the mens’ deaths were connected to a lack of adequate cultural programming for Indigenous residents.

They called for an investigation into the facility, which was launched by BC Housing shortly after the press release came out.

The review investigated the management practices of the Smithers Community Services Association (SCSA), which co-manages the building. It did not directly investigate the deaths, deeming them to be outside the scope of the review.

Its results found the SCSA is making efforts to create cultural safety at Goodacre Place and is interested in learning more about it as well.

Likewise, it notes elders would visit the facility and that those visits were important following the deaths. Smudging and ceremonial fire ceremonies also took place there after the deaths as well.

Notably, the building’s clients said unanimously in a survey that they felt their culture was respected there. A third of the clients also said they felt like their access to cultural programming had improved.

“Anyone doing this kind of service experiences firsthand the anguish and hurt that the people we're working with are experiencing,” said SCSA Executive Director Cathryn Olmstead.

“There's no way you can deliver that service without recognizing that there needs to be culturally safe practices in place for people to be able to live there.”

Despite its results, Olmstead added that she didn’t believe the report was clear enough in the way it expressed that the SCSA was not found to be at fault.

“We were hoping for a more substantial exoneration from BC Housing. I think you have to look very hard in the report to find the pieces that say that there was no fault found. Yes, indeed, it does exonerate us but certainly not to the extent that we were hoping for.”

As for the six deaths, Olmstead said Goodacre Place’s residents are very vulnerable, and that the people who died lived precarious lifestyles and had faced struggles in their past.

She added that three of the people who died passed away from natural causes and that one of them wanted to die in the building rather than inside a hospital.

The review included 31 recommendations for the SCSA, BC Housing and the Aboriginal Housing Management Association to improve the building’s cultural safety as well as its support services and operations.

For the SCSA, some recommendations include continuing to partner with local Indigenous groups, developing policies that acknowledge the facility has a primarily Indigenous population and collaborating with Northern health to provide a regularly scheduled onsite healthcare professional at Goodacre Place.

Although they didn’t draw a connection between the building’s cultural practices and the six deaths, the reviewers heard about many experiences of anti-Indigenous racism in Smithers from the people they interviewed

Many interview respondents agreed that Smithers “is not an Indigenous-friendly community,” and the report says this racism has had an affect on people’s willingness and ability to access community services.