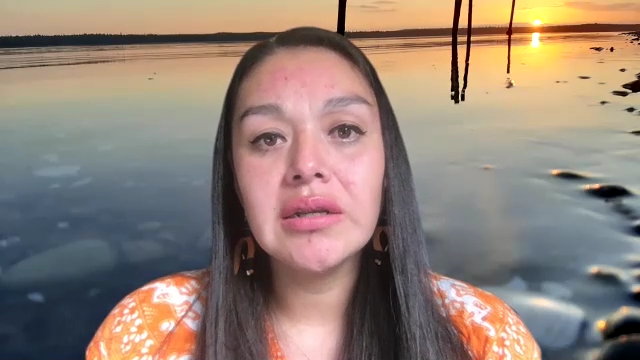 Adeana Young, pictured above in an interview with CFTK, is currently a trustee for the Haida Gwaii School District.

PRINCE RUPERT, B.C. -- There's a lot of speculation right now about whether or not Prime Minister Justin Trudeau will call an election sometime soon, and federal parties have been gearing up to make sure they're ready when the writ drops.

This week, the Green Party of Canada announced that Adeana Young will be their candidate for the Skeena-Bulkley Valley riding.

Young is currently a trustee with the Haida Gwaii school district, and she previously served as a village councillor for the Old Massett band council from 2016 to 2020.

She also starred in Edge of the Knife, a feature film from 2018 that was spoken entirely in the Haida Language.

Young, who is a member of the Haida Nation, says she sees the Green Party's approach to the environment and resource development as being very similar to how Indigenous communities approach those issues.

"I remember watching some of the documentaries that were made when the protests were going on at Lyell Island," she said. "I saw one of the interviewers ask one of the grandfathers down at the Skidegate end what they thought about the protesting on Lyell Island, and his response was, 'We never wanted to stop logging. We wanted to participate with it to make sure we're not going to lose it all.'

If elected, Young says the three main areas she wants to focus on include Truth and Reconciliation, the climate crisis and building relationships with constituents and other governments.

"Truth and Reconciliation has been a conversation for a long time, and I think, how else are we going to do it unless we have Indigenous representatives within the arena being able to participate in the structure that shaped our country?"

The NDP has held the Skeena-Bulkley Valley Riding since 2004, winning all six past elections.The riding's current MP, Taylor Bachrach, has already been acclaimed as the NDP candidate for the next election.

Young says her message to NDP voters is "you may be greener than you think."