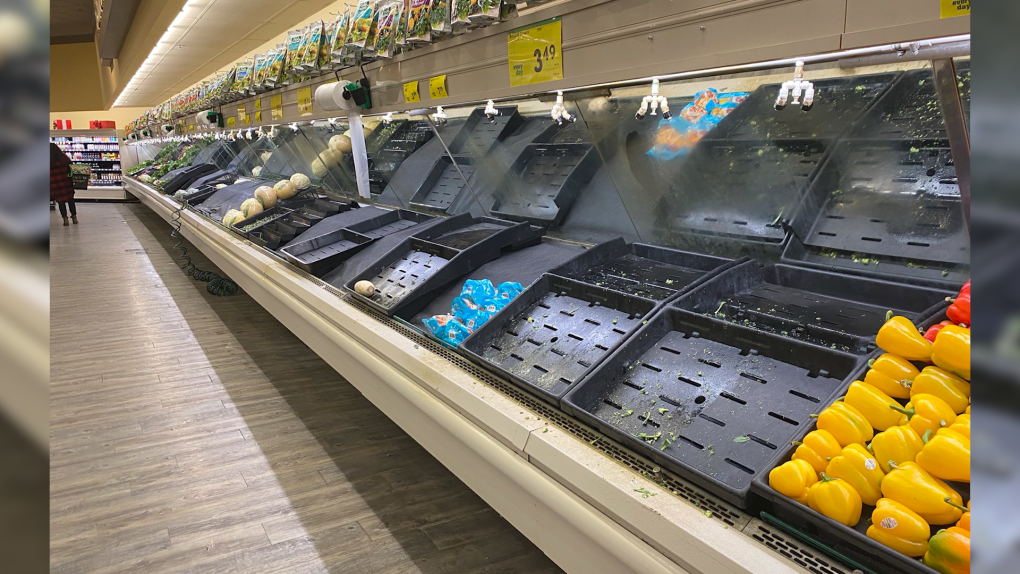 PRINCE RUPERT, B.C. -- The floods and road closures in the Lower Mainland have sparked concerns about supply chain disruptions in the north, while empty shelves in grocery stores have led some to suspect a new wave of panic buying is afoot.

In the Walmart in Terrace, shelves of meat, milk and bread were almost empty.

In the Prince Rupert Safeway, produce shelves were bare.

It's raised concerns that people are panic buying, but according to grocery store managers, the issue is complicated.

Prince Rupert Safeway manager Ranjit Gill says he did notice an increase in customers and goods sold yesterday, but his store also missed out on shipments of products from the Lower Mainland.

"We're missing a couple orders already. So there's a couple trucks that are still haven't arrived. So we are missing at least two trucks,” he said.

He says it shouldn't be long before they get more goods in stock.

"We have significant supply ready to be transported, and we're using all resources are being utilized to get it done as quickly as possible."

In Kitimat, Kyle's No Frills owner Kyle MacGillivray says the road closures down south meant he missed out on shipments of produce and bread, but he's expecting more shipments to come in soon from Edmonton instead.

Although he says the store was a little busier yesterday, he says there wasn’t any hoarding of goods.

Gill didn’t necessarily say there was panic buying, but he did see a notable increase in customers.

"They're not really stocking up like it was during COVID, but I think they're just making sure that they have some of the few essential stuff that they were going [to get] later in the week.”

North Coast MLA Jennifer Rice says the disruptions in the Lower Mainland won't lead to a massive cut in the supply chain.

“We do get a fair amount of goods from eastern Canada [and] from Alberta, and grocery stores are adapting quickly trying to get goods that they would normally get from the Lower Mainland, to get them from the east part of our province.”

She urged people to resist the urge to stockpile

"If you need milk and eggs, your neighbors and your community probably needs milk and eggs. So you want to leave some products on the shelves for everyone. "