Hundreds march through Prince Rupert on Canada Day in support of Indigenous peoples. 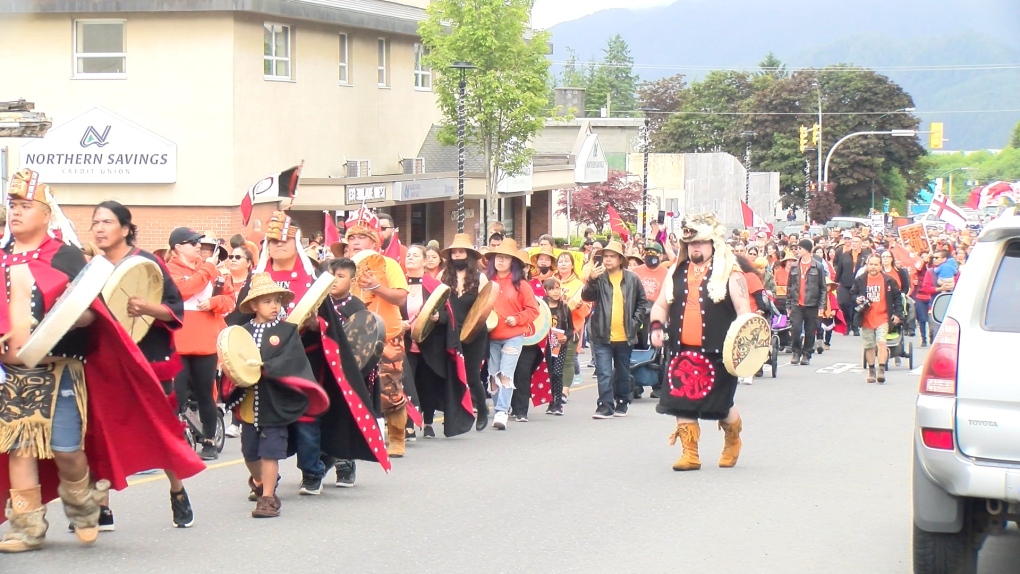 The crowd gathered at the courthouse and marched to to the city's waterfront, where there were performances by dancers, singers and drummers.

Hundreds of people gathered outside the city's courthouse yesterday at 12:30 p.m. to show solidary with Indigenous peoples.

The crowd then marched up McBride St., travelled through 3rd Ave. and then walked down to the city's waterfront, where there were performances by dancers, singers and drummers.

“I’m going to be honest, I was crying,” said event organizer Marlena Joseph in an interview after the event ended.

“Just as soon as the Harley riders came up through the courthouse, the emotion started flooding over me. I wasn't expecting it to be this big."

Canada Day has bee, the subject of much debate over the past few years, but recent discoveries of mass unmarked gravesites outside residential schools have sparked even more discussions about celebrating the holiday, which marks the anniversary of Canada’s confederation.

"It seemed to have hit almost everybody in the heart and opened up wounds,” said Joseph about the unmarked graves.

With this event, Joseph says she wanted people from all walks of life to come together and have a better understanding of the country's past.

“When I was going to school here, I didn't learn about the residential schools,” she said. “I learned about Columbus."

One memorable moment from the event was when the Gitmaxmak'ay Nisga'a Dancers performed the Mother's Cry Dance, an emotional piece that shows a person wearing a cross taking an Indigenous mother’s children away from her. At the end of the piece, she is reunited with her children.

Joseph is a mother herself, and she says that affected how she felt when she learned about the unmarked graves.

“Every time they have a number pop up, it feels like scars are getting ripped off your body. And then you're just feeling that pain."

It's a heartbreaking history to confront, but Joseph says she's glad people are coming together to listen to Indigenous peoples.

“Today was a good day,, and I know they're going to find more [unmarked graves],” she said.

“But this is what we want – to have a positive community together, and to understand our history and to bring light to it."