“It’s just not right the way they treat people:” concerns raised about homeless people being kicked out of Prince Rupert shelter 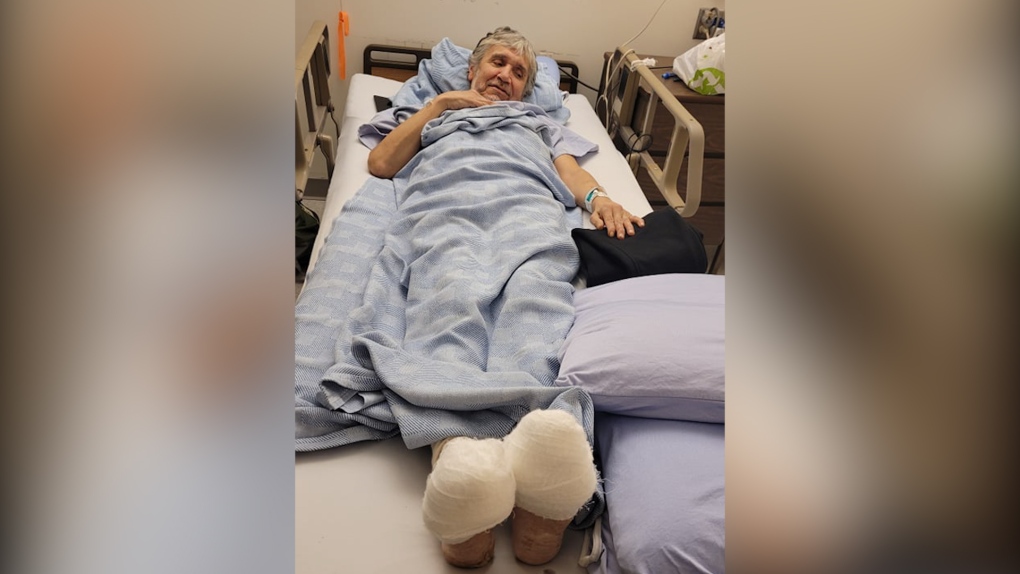 Ira Shaw was allegedly kicked out of the Crane’s Crossing shelter in Prince Rupert during freezing cold weather. He later caught frostbite and had to have four toes removed.

Concerns are being raised in Prince Rupert after a homeless man caught frostbite and had to have four toes amputated after allegedly being kicked out of a homeless shelter during freezing cold weather.

Ira Shaw was staying at the North Coast Transition Society's Cranes Crossing shelter in late December when he says he tapped the hand of one of the workers there who tried to take away his bowl of soup before he was finished.

For that, he says he was asked to leave the shelter, which at the time was located at the Fisherman’s Hall building.

" I was out for an hour, and then I went back after that hour was up and they said I had [to be out of the shelter for] two weeks,” he said in an interview with CFTK.

“I was outside for five days.”

Although Shaw is not sure of the date he was kicked out of the shelter on, he says it happened near the end of December, when temperatures were frequently well below zero degrees celsius in Prince Rupert.

After five days in the cold, Shaw says his niece eventually persuaded the shelter to let him back in. By then, the cold had affected his toes.

“The way they were hurting, I kind of figured I had frostbite," he said.

“I went to the washroom to check my feet out and my big toenail came off when I took my sock off.”

Shaw was later taken to hospitals in both Prince Rupert and Terrace, where he had a total of four toes amputated due to frostbite.

According to both advocates and people who’ve stayed in the city’s shelters before, it's common for people staying in them to get kicked out over various violations.

“They're getting kicked out for the smallest little things,” said Veronica Fenton, an advocate for the city’s homeless who communicates with them, brings them food and helps them access services.

"They're always getting kicked out, so they’d just rather stay outside now rather than go back and argue with these people for a meal that's not even worthy of eating because they don't feel like they're appreciated. They don’t feel like they’re human going back there. It’s sad.”

Andrew Wilkes was staying at the Crane’s Crossing shelter’s current location at the former Raffles Inn building. He says he was recently kicked out of the shelter for two weeks for swearing at staff.

“I understand there's consequences, but two weeks is a lot,” he said.

Walter Robinson previously stayed at both the Raffles Inn and Fisherman’s Hall locations of the shelter before he moved into his current living space at the Crow’s Nest Lodge supportive housing facility. He says he "got the boot" from the shelter a few times in the past as well.

“It’s just not right the way they treat people,” he said.

“Some of them, they just come into work and within three hours they have like three or four people kicked out for the night already.”

CFTK has reached out to the North Coast Transition Society for comment but has not yet received a response.

In a written statement, BC Housing said both itself and its partners make every effort to ensure everone in the community has a warm and safe place to stay.

“During the extreme cold weather in early January, the temporary shelter at Fisherman’s Hall was made available to anyone staying outside, including people who were previously asked not to return to the shelter for breaching policies,” it said.

“If a shelter guest repeatedly demonstrates unsafe behaviour, they will be asked to leave, for the safety of other guests and staff. Depending on their behaviour, the individual may not be permitted to return to the shelter for the foreseeable future. BC Housing is not able to discuss specific incidents due to privacy concerns.”

As for Shaw, he says he got the stitches taken off his feet this morning and he expects to be out of the Prince Rupert hospital by Monday.

He's not sure what he'll do next, but he's thinking about moving back to his home village of Kitkatla.