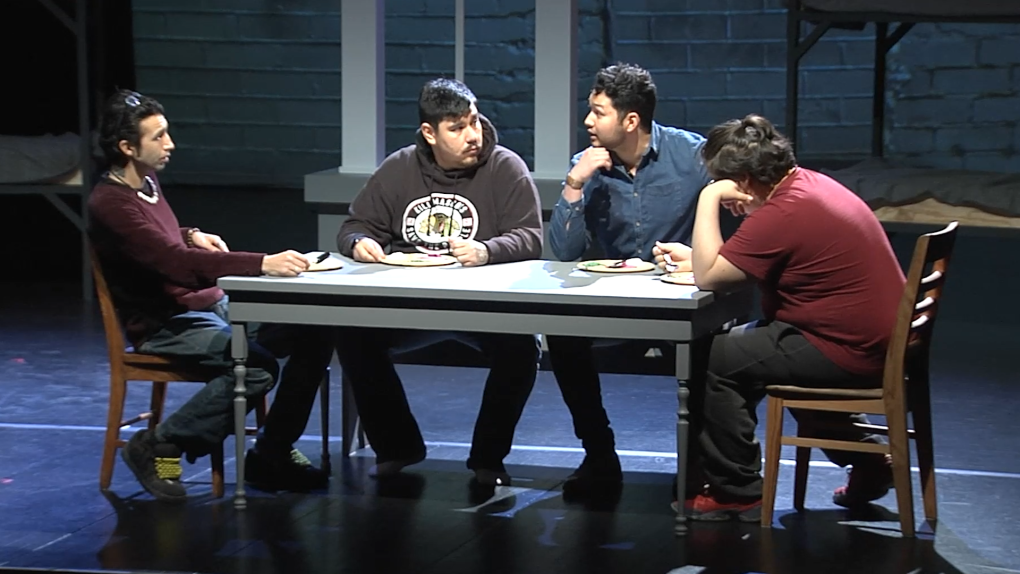 A rehearsal of Bunk #7 at the Terrace REM Lee Theatre. The play debuts on Saturday at 7 p.m.

The play details his experiences at a residential school in St. Albert in the early 1960s, where a riot broke out among the students in response to the abuse and poor conditions at the school.

“They’re trying to hang onto their culture. They’re trying to survive emotionally and spiritually and all that kind of stuff. So they formed their own little tribe,” says Marianne Brorup Weston, the play’s director.

Guno was an MLA for the former Atlin electoral district and a key player in the NIsga’a final agreement.

“He was good looking, very charismatic and really the nicest man you could meet. And his family meant the world to him,” said Brorup Weston.

Bunk #7 was initially set to debut at an Indigenous theatre festival in Toronto in 2006, but those plans were shelved when he suddenly passed away

“At some point, I can't remember quite when… the Gunu family asked me to take [the play] for safekeeping and to fulfill the promise I'd made to Larry to show it to his people one day,” said Brorup Weston.

In 2018, she officially began working with Guno’s family to bring the play to life. It was initially set to debut in May 2020.

“We were actually well into rehearsals when COVID shut us down in March of 2020. We were two months out from being finished with the project when it was like, ‘oops, you're not doing anything.’”

The play’s lead actor is Nick Dangeli. His character, Edward Gray, is based on Guno.

“It’s something that I’ve never seen before. It’s kind of breaking down the walls of what we think residential school was and is for someone who didn’t live or experience it,” he said.

“If your kids have seen a Marvel movie, they could come see this,” said Collison.

“So bring up the whole family. This is the history that Canada needs to learn and be a part of.”