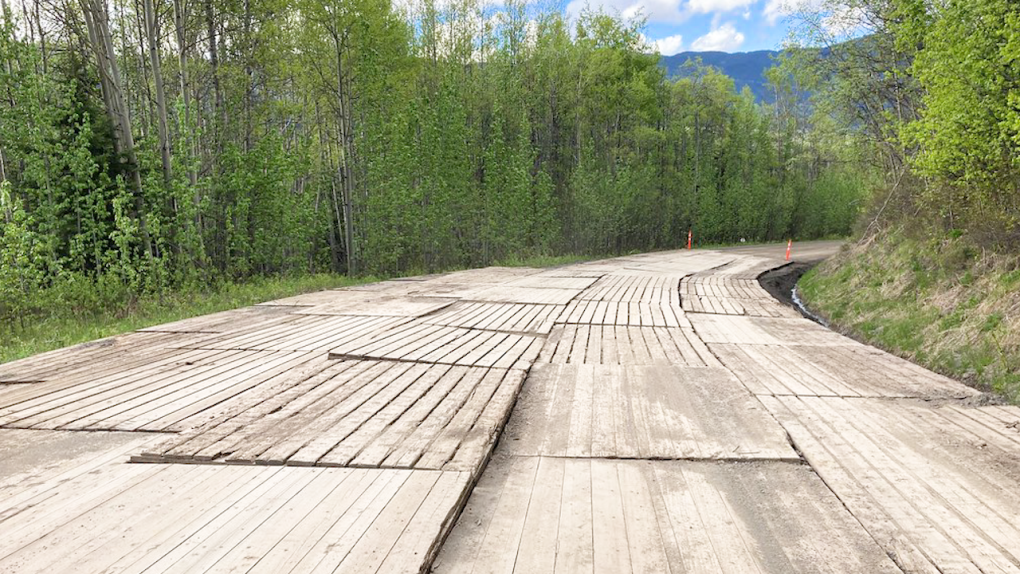 PRINCE RUPERT, B.C. -- Over four months after a washout first closed it off to the public, the Telegraph Creek Road has still not fully re-opened.

In early May, the road re-opened to light vehicles at select times of the day. A month later, a press release from the province said the road was expected to be fully re-opened in early July.

But right now, the road is only open to light traffic from noon to 1 p.m, and from 7 p.m. to 7 a.m. Briefing notes from the Ministry of Transportation say it currently takes about three hours to cross the 112-kilometre road as maintenance work on it continues.

Tahltan Band Council Chief Carmen McPhee said much of the ongoing construction is connected to a 50-kilometre section of the road that didn't thaw properly, which created plenty of mud that can go up to someone’s knees.

Maintenance workers put wooden rig mats onto the road as a temporary fix and are now working to fill the mud with rocks.

McPhee says it's work that takes a long time to get done.

"They take this section of the rig mats off and then they’ve got to haul rock, and the rock has to come from 40km or 50km away,” she said.

“So one truckload [takes] two hours. It has been really challenging and some of the places are needing like 20 loads of rock, so you can see why it takes so long.”

"It's hard on our people's mental health as well, not to be able to just drive out the road. Some people want to go hunting, camping, fishing – it's a little bit hard on them, for sure. And some people just like to drive to Dease Lake and it's a lot different now, and not as enjoyable because it's really bumpy."

McPhee says that although the work with the rig mats is almost done, construction on the road will likely continue until October when the temperature begins to drop.

She says work on strengthening and straightening the road will take place next year as well.