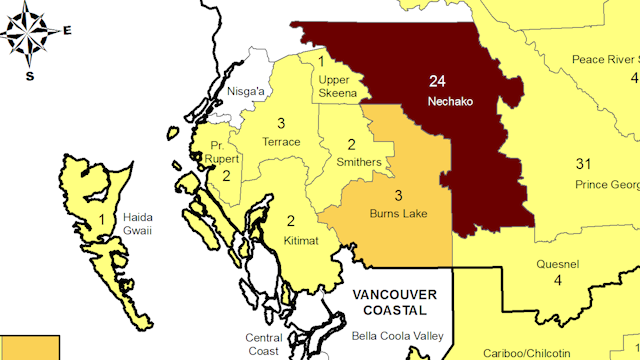 PRINCE RUPERT, B.C. -- COVID-19 is once again spreading throughout the Northwest.

From August 1st to 7th, the Local Health Areas for Terrace and Burns Lake reported 3 new cases each.

However, the biggest increase is in Nechako, which reported 24 new cases last week after reporting just two new cases in the previous week.

These numbers come after many months with few cases in the Northwest region.

Just a few weeks ago, from July 18th to 24th, there were only three new cases throughout the Northwest. But from July 25th to 31st, cases started to rise a bit, and the latest numbers suggest a small, upward trend.

Of course, the COVID-19 situation in B.C. is different now, compared to when the virus hit the Northwest hard at the start of the year. 82 per cent of B.C. residents over the age of 12 have now gotten their first dose of a COVID-19 vaccine, and 71 per cent have received their second.

In the Northwest, however, vaccination rates vary widely between regions.

Many of the highest rates can be found along the coast. Kitimat has the Northwest's highest first-dose vaccination rate, with 88 per cent of eligible residents having gotten a shot. Haida Gwaii follows with an 85 per cent first-dose rate, while Prince Rupert and Nisga’a are at both at 81 per cent.

However, the rates are slightly lower when you look at second doses. At 74 per cent, Haida Gwaii has the region's highest second-dose rate, followed by Kitimat at 72 per cent and Prince Rupert at 68 per cent.

Vaccination rates are notably low in the Bulkley-Nechako region.

Just 68 per cent of eligible Smithers residents have received their first dose, while that percentage is at 67 per cent in Burns Lake. In Nechako – which has one of the highest per capita case rates in the province – the first-dose rate is 63 per cent. For second doses, the rates for these areas are above 50 per cent but below 60 per cent.

B.C. might be going through a fourth wave right now, but most of the province's highest case rates can be found in the Okanagan and the Southeast.

Most notably, the Central Okanagan recorded 849 new cases in the first seven days of August.

Most of the infections there were among unvaccinated people, but the first dose vaccination rate for the Central Okanagan is at 77 per cent. It may be lower than the provincial average, but it's a rate that's on par with – and in some places, even higher than – many regions in the Northwest.