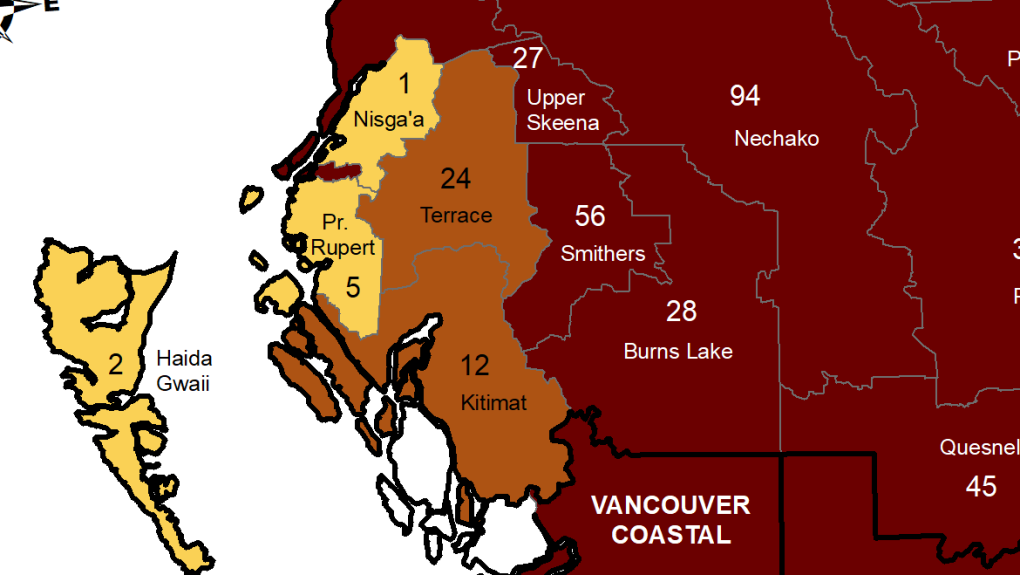 PRINCE RUPERT, B.C. -- The fourth wave is proving to be an intense challenge for Northern Health, and the latest data from the B.C. Centre for Disease Control (BCCDC) shows the virus is spreading vastly in some small communities west of Prince George.

The Upper Skeena area, which consists of the communities around Hazelton and is currently experiencing an outbreak at Wrinch Memorial Hospital, saw 27 new cases last week.

The BCCDC says these four Local Health Areas currently have the highest per capita case rates of COVID-19 in B.C., with Nechako having the highest.

The rate of new cases in the Smithers area has decreased from its peak in September, but COVID-19 is still very much present in the Bulkley Valley: the region recorded 56 new cases last week.

These five regions all have daily case rates below 20 cases per 100,000 people, according to the BCCDC. The only region in Northern Health with a similar rate of new cases last week was Fort Nelson.

Vaccination rates in the Northwest are continuing their slow climb upward, but the BCCDC has also released a disclaimer suggesting Kitimat's very high vaccination rate is likely inaccurate.

The centre says the community has a first dose rate of 99 per cent and a second dose rate of 84 per cent for people ages 18 and up.

It also says the first dose rate is 100 per cent for eligible residents 18 years of age and older.

However, Kitimat’s vaccination rate now includes a paragraph directly below it on the BCCDC’s Surveillance Dashboard.

“Denominator for this graph is Client Roster maintained by the BC Ministry of Health,” it reads.

“Client Roster population data are sourced from a list of all residents registered with Medical Services Plan as of March 13th, 2021. Since this date, people may have moved permanently or temporarily, and have been vaccinated or reported their vaccination status.

As a result, there are areas in BC where there will be more people vaccinated than there were living in that area in March 2021. The Client Roster likely underrepresents new arrivals into a region such as workers at major construction project areas.”

The mention of workers at major construction project areas is likely a reference to the many temporary workers currently staying at LNG Canada’s work camp.

Judging from the BCCDC’s statement, it seems likely LNG camp workers and other temporary employees in the community are included in the vaccination rate’s numerator but not the denominator, thus inflating the number.

Nonetheless, vaccination rates in other communities around B.C.’s North Coast remain relatively close to provincial average of 88 per cent for first doses and 82 per cent for second doses.

Vaccination rates in many of the Northwest’s inland areas are below the provincial average, particularly in the Bulkley Valley, Lakes District and Nechako regions.