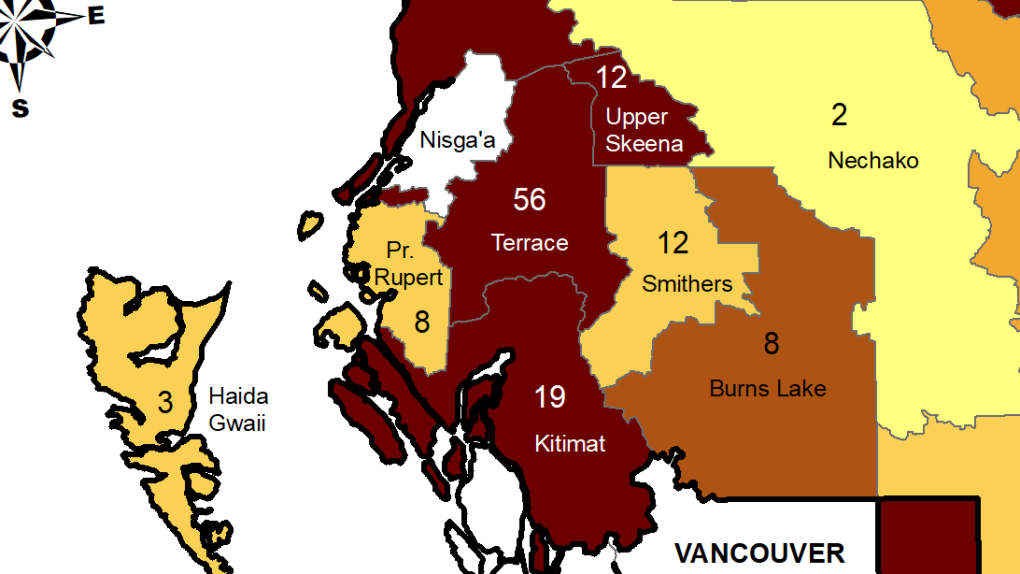 PRINCE RUPERT, B.C. -- The latest numbers from the B.C. Centre for Disease Control show it's been another week of high COVID-19 case counts in Terrace.

Other parts of the northwest with high per capita case rates include Kitimat with 19 new cases, Upper Skeena with 12 and the Snow Country – Stikine – Telegraph Creek aggregate with two.

Burns Lake had eight new cases while Nechako had two.

There were no new cases in Nisga'a for the second week in a row.

96 per cent of Kitimat residents are now fully vaccinated, although the BCCDC has warned that number might not be accurate due to a possible influx of temporary workers affecting the numerator of the vaccination rate.

In Prince Rupert, Haida Gwaii and Nisga'a, second-dose rates are between 85 to 88 per cent.

83 per cent of people in the far northwest are fully vaccinated. That rate is 82 per cent in Terrace and 79 per cent in Upper Skeena.

Despite a recent drop in cases, the Bulkley-Nechako areas still have lower than average vaccination rates.

Around three-quarters of residents in Smithers and Burns Lake have had two doses, while Nechako's second dose rate sits at 70 per cent.

More people in the northwest have now had a third dose as well. Most notably, Nisga’a has the highest third-dose rate in B.C., with 40 per cent f residents having received a third shot.

Snow Country – Stikine – Telegraph Creek is at 22 per cent for third doses, while Upper Skeena and Burns Lake are each at 20 per cent.

Elsewhere in the northwest, Haida Gwaii is at 18 per cent; Terrace is at 15 per cent; Kitimat is at 14 per cent; Smithers is at 10 per cent and Prince Rupert and Nechako are both at nine per cent each.