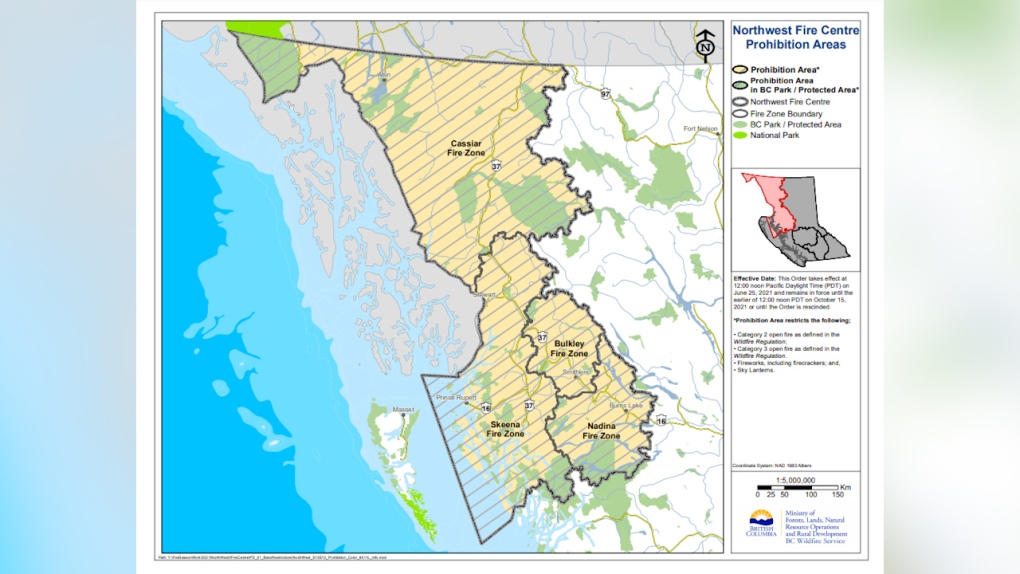 PRINCE RUPERT, B.C. -- The Northwest Fire Centre has implemented a ban on open fires due to expected elevated temperatures throughout the region this weekend.

The ban specifically prohibits “Category 2” and “Category 3” fires. Category 2 fires refer to burning piles that don’t exceed two metres in height and three metres in width, as well as stubble or grass fires over an area smaller than 0.2 hectares.

Category 3 fires refer to burning piles larger than those in Category 2, stubble or grass fires that are larger than 0.2 hectares, three or more Category 2-sized piles burning at the same time, and one or more burning windrows.

Fireworks, firecrackers and sky lanterns are also prohibited. Campfires that are 0.5 metres in both height and width or smaller are not banned, but anyone who lights one must remove all flammable debris from around the campfire area and have either a hand tool or at least eight litres of water nearby to extinguish the fire if needed.

Cooking stoves that use gas, propane or briquettes are also not prohibited.

The ban takes effect at noon on Friday, June 25th. It will stay in place until October 15th unless the public is notified otherwise.

Based in Smithers, the Northwest Fire Centre coordinates the wildfire response in the northwestern quarter of the province. Its boundaries stretch horizontally from the North Coast to west of Endako, and vertically from the B.C.-Yukon border to Tweedsmuir Provincial Park.

Anyone who is found violating the ban on open burning may be issued a $1,150 violation ticket or required to pay an administrative penalty of up to $10,000. If convicted in court, violators of the ban could be fined for up to $100,000 and/or sentenced to a year in jail.

Anyone who violates the ban and is found to have contributed to the start of a wildfire may be deemed responsible for covering costs related to fighting the fire.