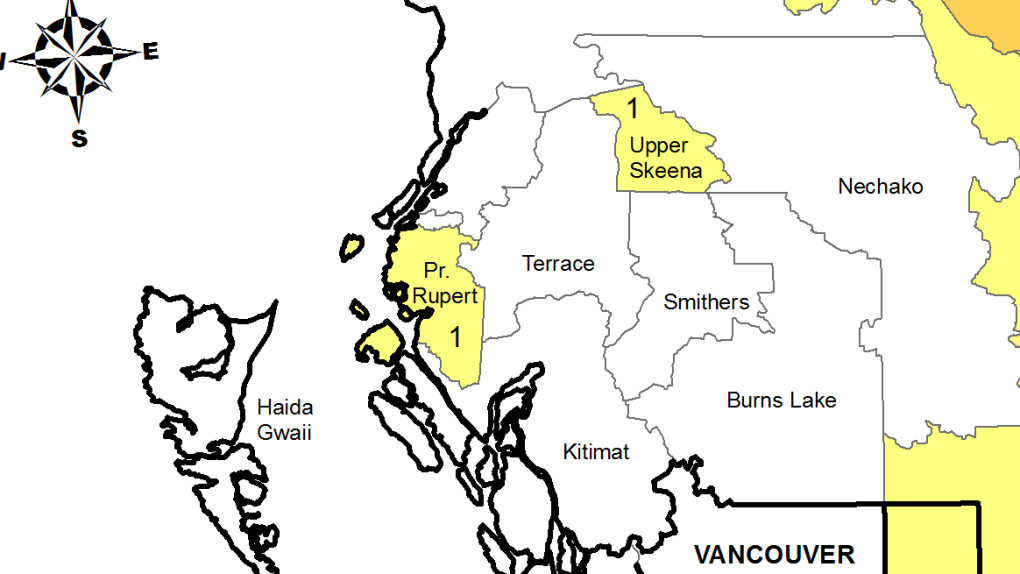 A section of a BCCDC map outlining recorded COVID-19 cases from May 30th to June 5th, 2021. (Source: B.C. Centre for Disease Control).

PRINCE RUPERT, B.C. -- British Columbia has seen a notable drop in COVID-19 cases in the last week, and the Northwest is no exception.

From May 30th to June 5th, one new case of the virus was found in Prince Rupert, and another case was found in the Upper Skeena region. Every other Local Health Area (LHA) in Northern B.C. located west of Prince George saw no new cases.

These low numbers come as the majority of eligible residents in B.C. have received at least one dose of COVID-19 vaccine. However, vaccination rates vary widely throughout the Northwest.

In some areas, vaccine intake has been quite strong. As of June 1st, between 75 and 78 per cent of residents ages 12 and up in Kitimat, Prince Rupert and Haida Gwaii have received at least one dose of vaccine. That rate sits at 71 per cent for both the Nisga'a and Upper Skeena regions.

However, vaccination rates are lower in some inland areas. Just 59 per cent of eligible residents in Smithers and Burns Lake – and 55 per cent in Nechako – have received a vaccine dose.

These rates are some of the lowest in all of British Columbia, and only four other LHAs have a lower vaccination rate than Nechako.

In Terrace, 67 per cent of eligible residents have received at least one dose of vaccine. The Snow Country - Stikine - Telegraph Creek aggregate, which encompasses the top-left corner of the province, has a similar first-dose vaccination rate of 66 per cent.