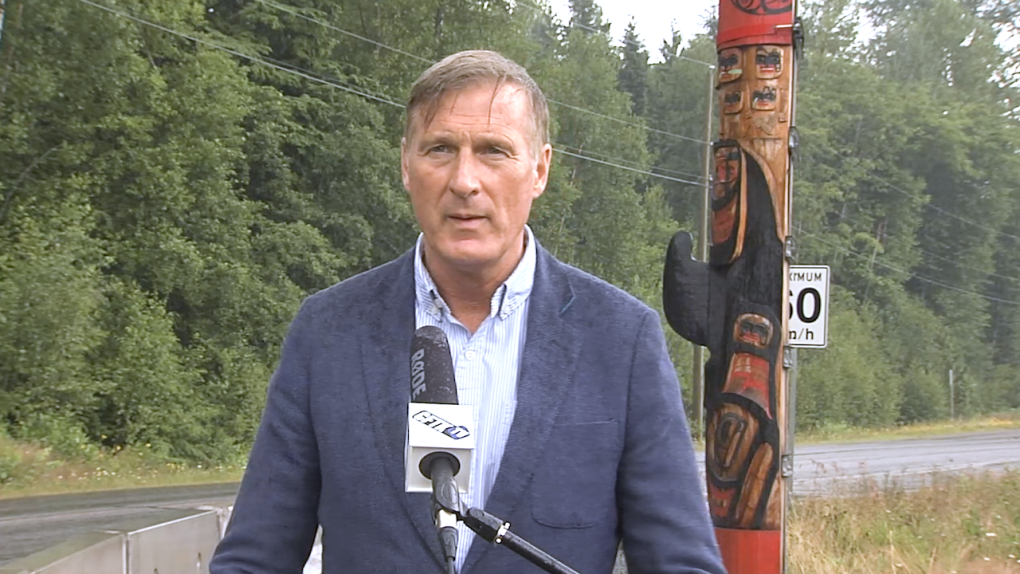 Bernier held a series of meet-and-greets throughout the city and also took part in a ceremony at the Highway of Tears totem pole with two residential school survivors. (Source: Steve Ross/CFTK).

The former conservative cabinet minister held a series of meet-and-greets throughout the city, starting at Terrace Timber Mart on Keith Avenue. Alongside him was Jody Craven, the PPC candidate for the Skeena-Bulkley Valley.

Bernier and Craven later held meetings with the public at Terrace Honda, Café Zesta, Mountainside Gallery and at an AirB&B on McConnell Ave.

“I had very good meetings with small business owners,” said Bernier. “It’s been a big challenge for them because of COVID-19 and all the lockdowns, but now they told me that it's going better and they're reopening. So I'm very pleased with that.”

Bernier is highly opposed to various public health restrictions such as lockdowns that governments have imposed to combat the spread of COVID-19. He’s also opposed to vaccine passport programs.

“For me, civil liberties and freedom is more important because there's other ways to fight that virus,” he said.

“We know that we must protect the most vulnerable and we must reopen the economy. People must be able to do what they want to do… I'm very pleased that it's open right now, but I don't want that to start again this fall.”

Bernier also took part in a small ceremony at the Highway of Tears totem pole with two residential school survivors.

When asked what campaign promises the PPC has for Indigenous people, Bernier referred to two points from the party’s platform: establishing respectful relationships and abolishing the Indian Act.

“When people are speaking about systemic racism in this country, I don't believe in that, but the only racist act that we have in Canada is the Indian Act. It's based on race, we must abolish that. And we must have a kind of property rights on reserve that would bring more prosperity.”

The People’s Party only got 2.3 per cent of votes in the Skeena-Bulkley Valley riding during the 2019 election. Country-wide, the party only got 1.6 per cent overall. For the next election, Bernier says his goal is to increase his party’s percentage of the vote.

Bernier travelled to Smithers today, where he held various meet and greets and took part in a tour of the West Fraser Pacific Inland Resources sawmill.