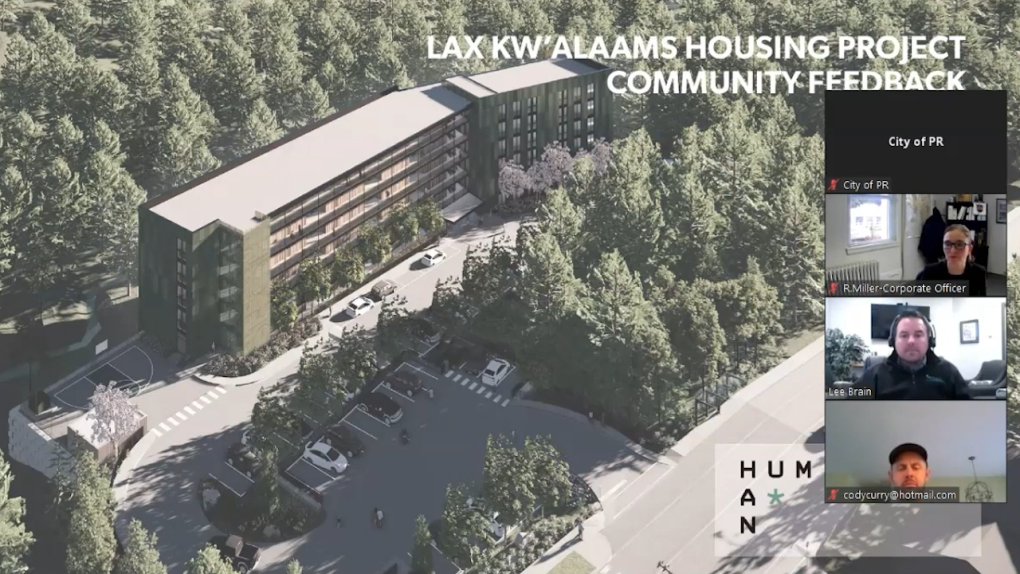 An artists' depiction of the proposed 70-unit supportive housing project for Lax Kw'alaams Band Members is shown in a slide show during the project's second public hearing. (Source: City of Prince Rupert - Youtube).

However, the motion passed after a tense second public hearing on the project, where residents who live near the proposed project site at 11th Avenue East expressed their opposition towards it.

Concerns raised included the project’s density, its added impacts on traffic, the possible effect on nearby homeowners’ property values and the fact that it will specifically house Lax Kw’alaams Band members.

The project’s proponents said measures such as traffic bulges and a crosswalk were added to address traffic concerns, and that research indicates the project won’t directly affect property values.

Speakers were also highly critical of the consultation process.

One person argued councillors were trying to push the project through, that they had already made their minds up, and that their body language suggests they weren’t listening to people’s concerns.

“Around the insinuation that somehow this is a done deal – that we've already seemed to make up our minds, that we're trying to push this through – I wouldn't go quite as far as to say I'm insulted. But I do think that it's a little unfair for us to be accused of not being able to speak to people's concerns in the very forum that’s specifically meant for us not to talk, but to actually listen to concerns”

Nonetheless, the councillors voted to support the project, citing the need to provide more housing in the city.

“The most important issue here that we need to try and solve is to ease the pressure on housing, and this project is one step towards doing that,” said Councillor Nick Adey.

The passed bylaw will now be sent to the Transportation Ministry for approval, and the projects' proponents now need to finalize a restrictive covenant for the new traffic measures.

After that, the project can be sent back to council for adoption.