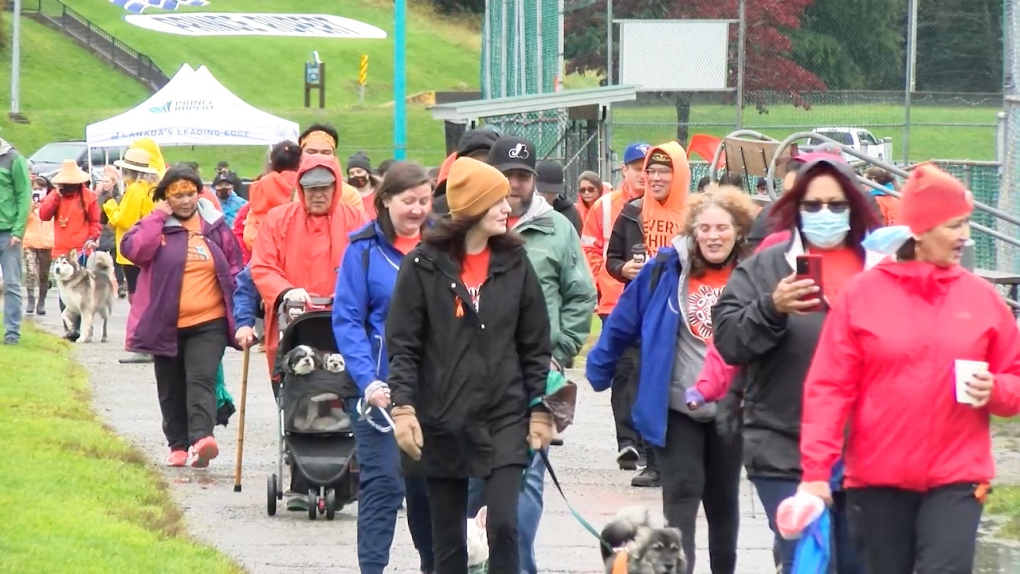 The event’s goal was 215 laps together for the 215 missing children from the Kamloops Indian Residential School. The Friendship House Association of Prince Rupert says the community did a total of 4,265 laps around the track.

PRINCE RUPERT, B.C. -- A bit of rainy weather yesterday didn't stop Prince Rupert from coming out for the first National Day for Truth and Reconciliation.

The Friendship House Association of Prince Rupert held a community walk at the Jim Ciccone Civic Center’s track for the new statutory holiday. The event’s goal was 215 laps together for the 215 missing children from the Kamloops Indian Residential School. Hundreds of people, both Indigenous and non-Indigenous, came out to pay their respects.

“I think it's a good start for everything, for Canada,” said Henry Morgan, a member of the Gitxsan Nation, regarding the creation of the holiday.

Much of Morgan’s family went to residential school, and he himself went to Indian day school. During the event, he used a smudge to cleanse the air.

“There's lots of emotions, lots of hurt and lots of energy here today. We just want to be able to allow the prayers to go to the creator in a good way,” he said.

“Everybody in the Native community has been touched by residential schools,” said Chris Pahl, an attendee at Thursday’s event and a member of a Tsimshian dance group. He too has been affected by Canada's colonial history.

“My father was a residential school survivor, if you could say that. I mean, a lot of stories that he had come up with – it really pulls your heartstrings.”

He says progress has been made, but Canada still has a long way to go.

“Think about all the wonderful people that are stuck on villages that don't have access to clean drinking water,” said Pahl.

About an hour into the event, people walked into the center of the field and a drum circle came together.

“A lot of the songs were almost more spiritual for blessings for the people who passed on,” said Marlena Joseph, one of the drummers at the event.

“I think a lot of our energy today for our peace songs are going towards the Residential School survivors and the ones who also didn't make it – the children they are continuing to find every day.”

For Joseph, the new holiday is a day for Indigenous people to step forward.

“It's a day for to let people know that we are still here. We have voices – our generation have voices now that are going to start speaking out, coming to events like this and having that courage instead of sitting in the back.”

The Friendship House Association says the community did a total of 4,265 laps around the track to honour the thousands of children who died at residential school.

Events for the new holiday were also held yesterday in Terrace, Smithers and Kitimat.