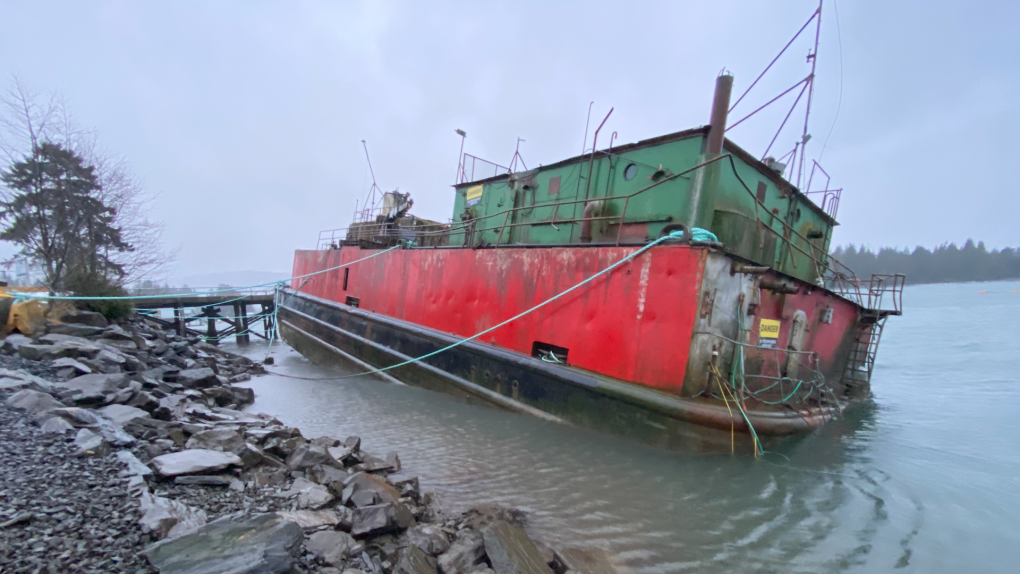 The Scotch Cap barge, which is currently beached in Port Edward, will be torn down over the next four weeks. The work is expected to be completed by February 10th. (Photo source: Marine Recycling Corporation).

Back in September, two large abandoned vessels broke loose and beached themselves at the Porpoise Harbour boat launch in Port Edward, raising concerns about possible environmental damage and how the two boats would be removed from the area.

This week, the Prince Rupert Port Authority began work on decommissioning one of the vessels.

The Scotch Cap barge, which is currently beached in Port Edward, will be torn down over the next four weeks. The work is expected to be completed by February 10th.

The contractor working on the barge is currently working on securing the site and removing any hazardous materials that might still be on it.

After that, they can begin tearing it down.

"The barge itself will be will be cut up into a couple dozen sections,” said Ken Veldman, PRPA VP Public Affairs and Sustainability.

“With the assistance of a large crane on site, they’ll be taking each of those parts and cutting them up a little bit further so that they're suitable for loading onto a truck and trailer, removing them from the site and ensuring that the remaining materials are being recycled properly."

However, work has not yet begun on tearing down the Fairwind vessel, which is currently anchored near Porpoise Harbour.

Port Edward Mayor Knut Bjorndal says he's concerned about the boat, which still has contaminants like fuel and diesel inside it.

“We’d like to see that taken away [and] dismantled so it doesn’t become an environmental concern in this area,” he said.

“It does contain fuel, heavy engine oils and things like that. What else is on that? I have no idea.”

Veldman says the Fairwind is currently secured and has monitoring technologies inside it that will alert them if conditions change.

“We’re comfortable with the mitigation and the layers of protection that are in place for it right now. It's not a permanent solution, and that's where that's where the next steps are going to be.”

Veldman says the Canadian Coast Guard's Vessels of Concern Program will be playing a role in addressing the Fairwind.

In an emailed statement to CFTK, a spokesperson for the Canadian Coast Guard says it is currently engaged in contracting the destruction of the Fairwind vessel in accordance with Federal Procurement guidelines. It expects the deconstruction of the vessel to take place this year.