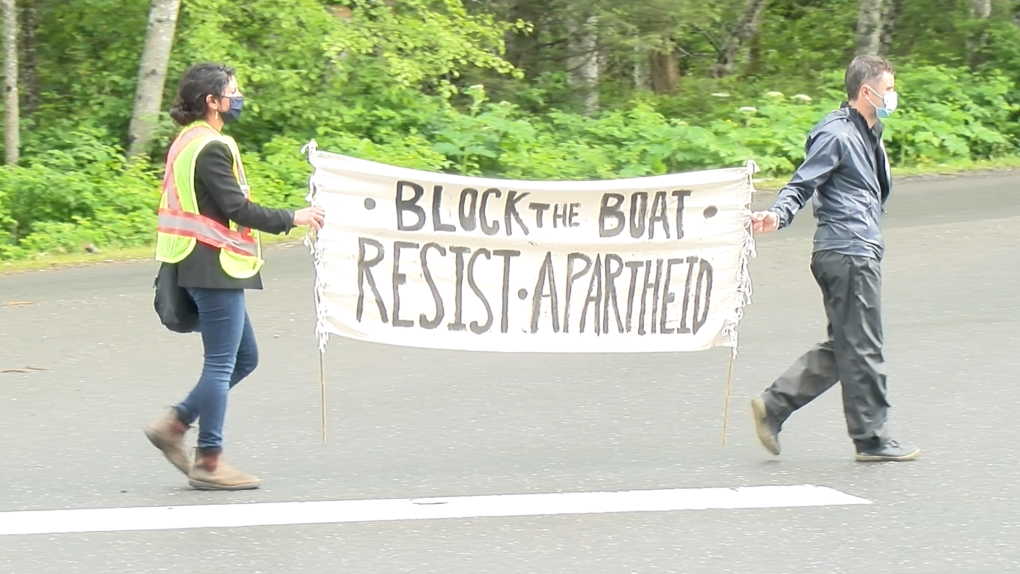 Demonstrators at Tuesday's protest hoped the Prince Rupert Port Authority would turn the Volans ship around in response to Israel's actions and policies towards Palestinians.

PRINCE RUPERT, B.C. -- Another protest was held yesterday at the Prince Rupert port over the arrival of an Israeli ship at the Fairview Container Terminal.

On Monday, protestors formed a picket line that unionized dock workers wouldn't cross. As a result, the Volans ship – which is owned by Israeli shipping company ZIM Integrated Shipping Services – was unable to dock.

The protestors said they wanted to block the boat in response to Israel's treatments of Palestinian states. Recent violence between Israel and Palestine resulted in a disproportionately higher number of Palestinian casualties, and groups such as Human Rights Watch have argued Israel's policies towards Palestinians amount to apartheid.

However, protestors caught word the ship was trying to dock again. They set up their picket line outside the terminal on Scott Road yesterday at around 3 p.m.

"There's a genocide going on and it's been going on for decades," said Jon Callfas, a protestor at yesterday's demonstration. "It can't be put up with."

According to MyShipTracking.com, the boat was moored at the terminal around at 3:45 p.m on Tuesday.

Rasha El-Endari, one of the organizers of the picket line, said the docking of the boat didn't stop the protest.

"We'll continue our picket here to see what we can do to put pressure on the port not to unload the ship, and we'll see how it goes from here," she said.

Protestors hoped the port would reject the ship in solidarity with Palestinians, and El-Endari says they were disappointed when that didn't happen.

"It is sad. We all feel sad that the ship is tied at the port."

Unionized longshore workers once again refused to cross the picket line at yesterday's protest. Although the ship may have docked, El-Endari says she appreciated the support they've received.

"To see that much support in Rupert for the Palestinian cause, in the other part of the world – it's amazing how people are connecting to other people's struggles."

The Prince Rupert Port Authority, ZIM and DP World – which operates the Fairview container terminal – have not responded to requests for comment from CFTK.