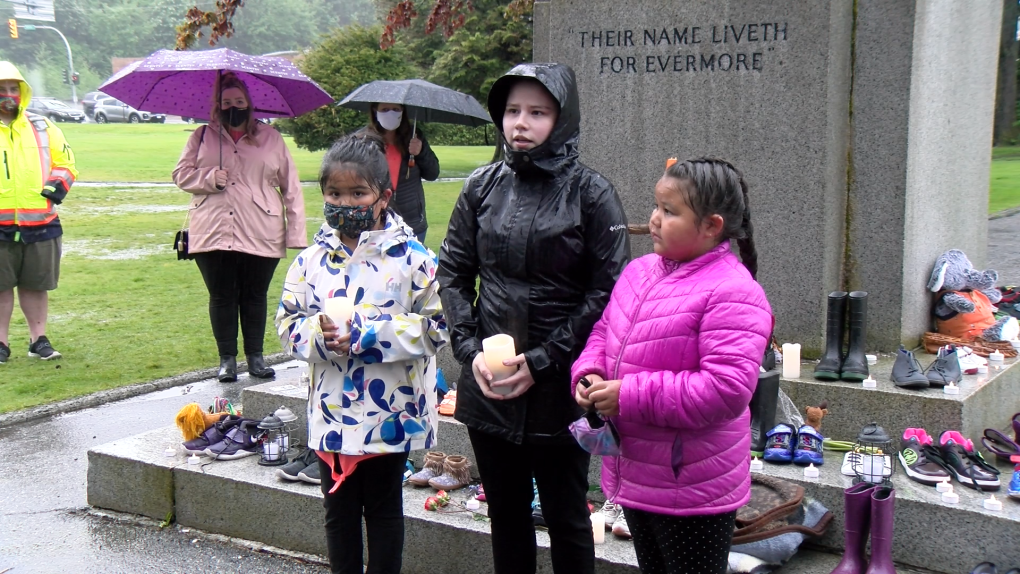 A woman and two young girls prepare to sing the Women's Warrior Song at a vigil in Prince Rupert on Monday in memory of residential schoolchildren.

PRINCE RUPERT, B.C. -- Prince Rupert residents braved the pouring rain yesterday evening to attend a vigil outside the courthouse for the 215 Indigenous children whose remains were found buried at the Kamloops Residential School last week.

Dozens of people gathered around the city's war memorial, where they laid down shoes and gifts for the children as well as artificial candles that wouldn't go out in the rain.

Some people also gave speeches to the crowd. Lax Kw'alaams Band member Michelle Bryant-Gravelle said this isn't the first mass grave to be found at a residential school, but it's taken until now for something to happen.

In an interview, she said she felt "horrible" when she heard about the children in Kamloops.

"I immediately broke down in tears," she said. "I have children. I'm a mother. I'm a grandmother. I was a school teacher for 10 years. And the immense grief that I felt inside felt like generational grief. I felt the grief of our ancestors of the people who have gone before in residential schools. It made me sick."

Bryant-Gravelle also spoke about how more allies need to speak up and demand change in the country.

Prince Rupert city councillor Reid Skelton-Morven – who is of Tsimshian and Nisga'a heritage and also the grandson of a residential school survivor – spoke at the event as well.

"Although times like these can bring out various forms of hardship and pain and anger, it is in relationship with love and connection, and coexistence ultimately is the goal," he said in an interview.

"We want to find ways to move ahead and move forward. This doesn't mean that it's going to be easy – there going to be a lot of hardship and a lot of challenges and injustice that we'll unearth in the process, and a lot of pain for a lot of folks. But ultimately, the end goal – and I see that in a lot of people's faces – is love and coexistence, and I think that's important."

The event closed with a rendition of the Women's Warrior Song.