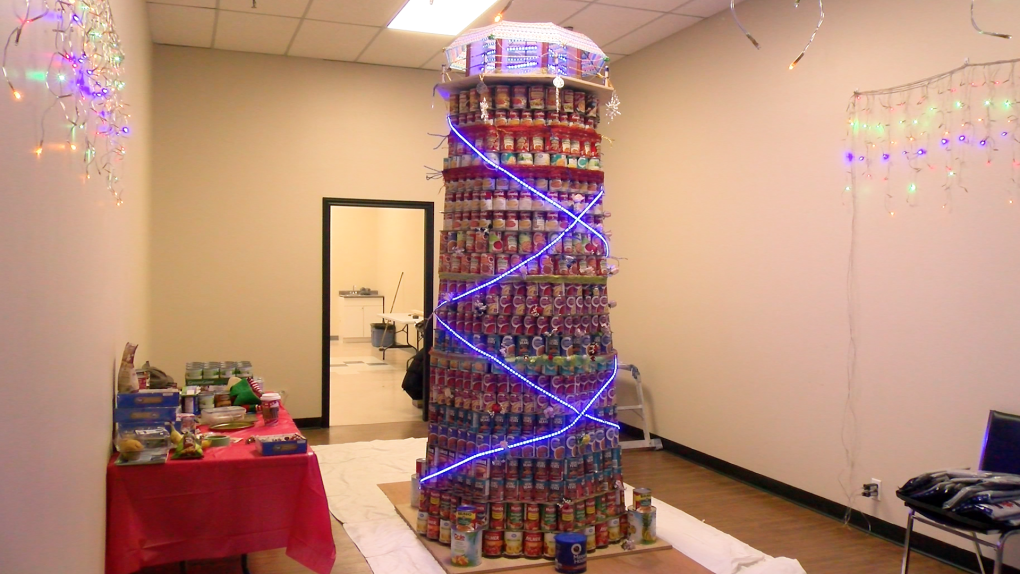 The Prince Rupert Salvation Army and International Longshore and Warehouse Union Local 505 have built a stack of canned goods in Rupert Square Mall as part of their "Canstruction" donation drive.

PRINCE RUPERT, B.C. -- The International Longshore and Warehouse Union Local 505 in Prince Rupert has teamed up with the Salvation Army to raise non-perishable goods for the church's food bank.

The two groups have partnered on an initiative titled “Canstruction.” They have built a giant tower of donated canned foods in the Rupert Square Mall and are looking for more donations.

"I see a real great need in the community right now for food and clothing, shelter and stuff like this,” said George Sebastian, a longshore worker and ILWU Local 505 member who is spearheading the Canstruction project.

The Salvation Army helped Sebastian’s family when he was younger, and now he wants to give back.

“They’ve delivered food and some gifts for us. My mother – single mom, six kids. Things were tight 50 years ago.”

Sebastian says the tower of cans in the mall is stacked in the shape of a lighthouse. Moving forward, he hopes to build a seawall with the cans as well.

"It'll be a great boost to the food bank, because we always kind of see a lull just after Christmas,” said Prince Rupert Salvation Army Pastor Lt. Dawn Butt.

“We'll be able to help that many more people with this help. It's been great."

Butt says donations at the Salvation Army are down this holiday season.

“More people are being laid off, rent is going up, the cost of food is going up, cost of living in general is going up and kids are expensive. Prices rise, and so our services increase."

It all makes Sebastian's efforts for the church’s food bank all the more appreciated.

"Some people will give out of guilt and obligation. George's giving his time and his energy just from his heart, and that's really what we aim to see," said Butt.

When asked how it feels to see all the donations coming in, Sebastian said it’s a “wonderful” feeling.

“There's a sense of sharing, and I'm so proud of my brothers and sisters who have come out to donate their time.”

Along with the canned goods, Canstruction has also raised over $8000 in donations.