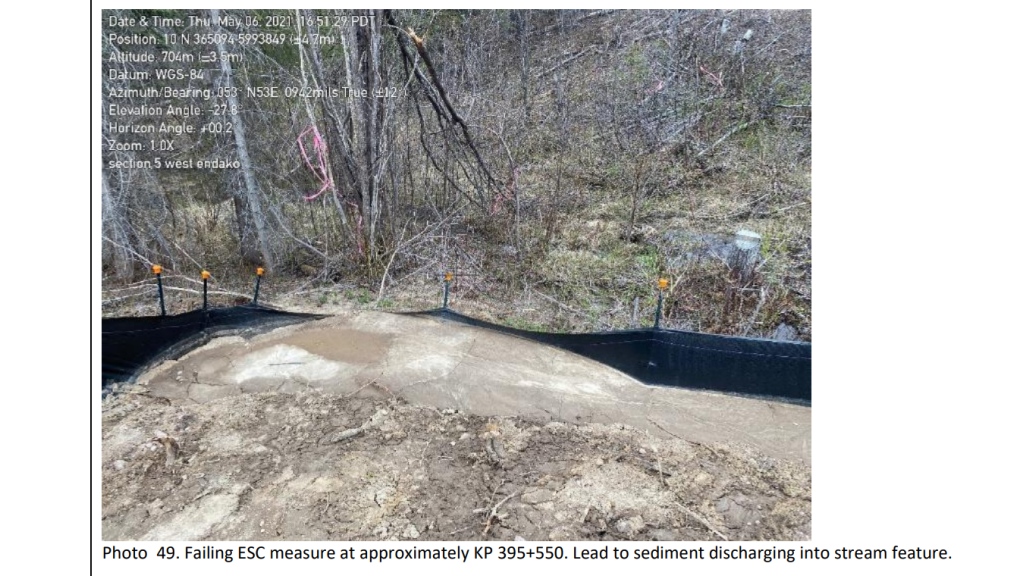 PRINCE RUPERT, B.C. -- A report by the B.C. Environmental Assessment Office (EAO) says Coastal Gaslink has not been in compliance with a previous order that said it must take more action to protect sensitive environmental areas along its construction route.

Last year, the EAO inspected the project and found Coastal Gaslink had failed to properly implement erosion and sediment control measures near watercourses, surface waters, wetlands and other sensitive areas.

The EAO ordered the company to improve their efforts and to maintain these measures throughout and after construction.

However, the office inspected the work area again this spring in various locations between Chetwynd and Smithers and found multiple instances where sediment-laden water from the project had found its way into watercourses and wetlands.

The inspection also found examples of efforts to control erosion and sediment that were installed by the company but found to be ineffective.

As a result, the EAO is recommending an administrative penalty, which could result in the company facing fines.

The report also details various other environmental infractions by Coastal Gaslink, many of which went against the company's own environmental plan.

Coastal Gaslink was required to clearly identify sensitive environmental features to ensure their protection, but the inspection found many instances where signs near sensitive areas had fallen over or were absent, not visible or faded.

In response, the EAO issued a new order to the company requiring it to properly install the signs and supply evidence.

It also found instances where the company had failed to secure food waste, return waterways as close as practical to their original forms, properly replant willows and safely store fuels, chemicals and other contaminants.

For these areas, the company was issued a warning.

The one area in the report where Coastal Gaslink was found to be in compliance was in the protection and proper signage of Whitebark Pine trees.

In a written statement to CFTK, Coastal Gaslink says it respects the findings of the EAO's recent inspection report and enforcement order.

"Coastal GasLink and its contractors always strive for the highest standards of environmental protection and compliance," reads the statement.

It also says the EAO's findings represent a snapshot at the time of the inspection -- which took place in April and early May of this year -- and that the project has since worked to address the findings in the inspection report.