Regional district of Kitimat-Stikine officially declares a State of Emergency. 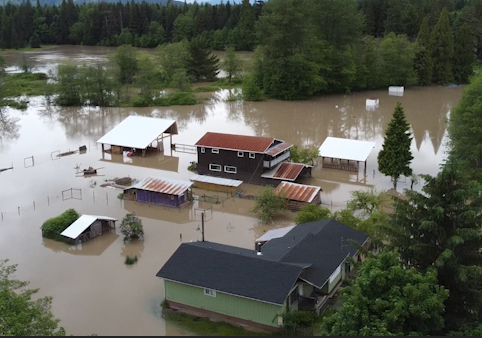 As a result they have officially declared a State of Emergency in Electoral Area C due to flooding. This area includes parts of Old Remo, New Remo, and Usk.

They have not ordered an evacuation order as of yet, but are highly recommending that people in that area do everything that they can to try and prevent or alleviate the effects of the emergency. Dave Jephson, from Terrace Search and Rescue, says they had already started receiving rescue calls as early as Wednesday afternoon

“Since yesterday, the first calls started yesterday around one o'clock in the afternoon, we got a request to go and assist a lady from Old Remo who had been stranded and cut off by the rising waters so fast yesterday.” said Jephson, “While they were in there they worked with another family and helped them be removed so they were safe and sound.”

Other areas that are being affected due to the rising waters include a flood watch for the Skeena and Kipsiox Rivers including the North Coast, a flood warning for the Stikine and the Skeena above Babine, and a High StreamFlow Advisory for the Bulkley and Nass Rivers.

Jephson says that people in these regions can take certain steps to try and avoid being disconnected, such as not driving through water or standing near any raised water, as they are beginning to see a lot of ground move. He also adds that people who have experienced flooding before, need to take extra precautions.

“If your community or if your home has flooded in the past, you should not be in your house right now.” warned Jephson. “That's probably the easiest message. Listen to the authorities, the regional district is putting steps in place to encourage the people in Old Remo and New Remo to evacuate.There is no end right now in the weather, if you've flooded before or you believe that you are going to flood, you should have all your possessions in your vehicle and you should be leaving.

Jephson adds that those who have evacuated their homes already, need to report to the Thornhill Community Centre for registration and assistance.