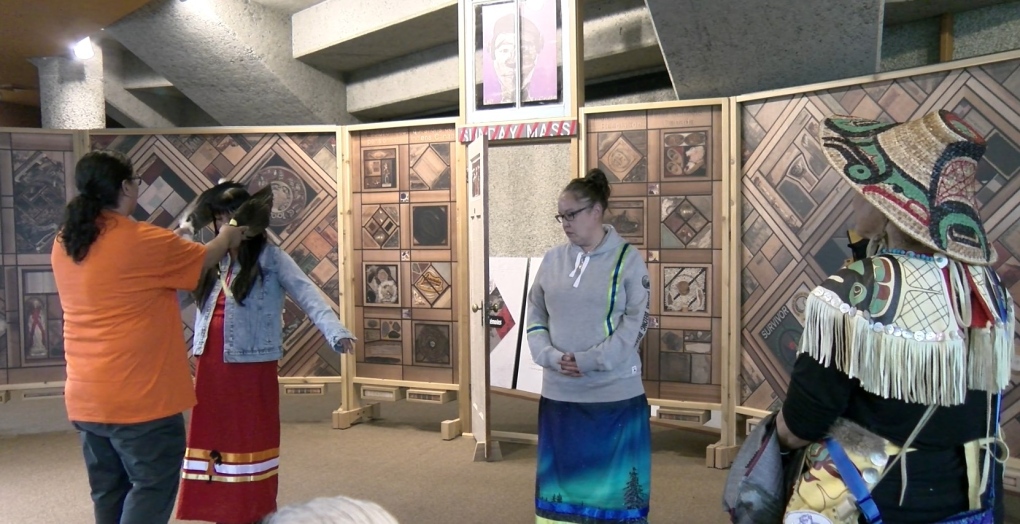 Residential School survivors from the Northwest were afforded an opportunity to stand in front of the Witness Blanket to speak and share their personal stories on May 27.

A replica of the witness blanket has been on display at the Lester Center of the Arts in Prince Rupert for the month of May before it moves on as part of its nationwide tour.

"Truth telling, having that space for truth telling is just one of the priorities because in residential schools we're always shut down.You're always told to be quiet. Even children of survivors. I was told to be quiet. I was told to not tell the truth, that nobody's going to believe you. And so having ceremonies like this, it's really important for the for the survivors." said Arelene Roberts from the Indian Residential School Survivor Society.

The event, which was organized by the Indian residential School Survivor Society, had survivors and their families come up one by one to share the atrocities they experienced to their community.  Among those in attendance were Skeena-Bulkely Valley MP Taylor Bachrach anmd North Coast MLA Jennifer Rice.

"It's a powerful day and an important day. Being here with the witness blanket and with the survivors, it's just it's an opportunity for reflection and an opportunity to honor and support the people who've been who've been so deeply affected by residential schools," Bachrach told CFTK-TV News.

"I'm glad to see people from all across the Northwest here. It's important day. It's also very significant day in the fact that we're at the one year point of when the 215 children's remains were rediscovered, I guess you could say, in Kamloops. So yeah, today is a pretty significant day and I'm just happy to be a part of it," said Rice

Though events like these are crucial for the healing process, Robert says that the work is far from over and.

"We need to keep healing. And we have a lot of allies and supporters that stand with us. It's not just the survivors and the families. We all come together that is what reconciliation is, and that's what we've been doing for since 1995. We've been doing this for a long time and it was just given the title reconciliation, you know, and but it defined what we've already done, and what where we're going with continuing on with the healing." she said.