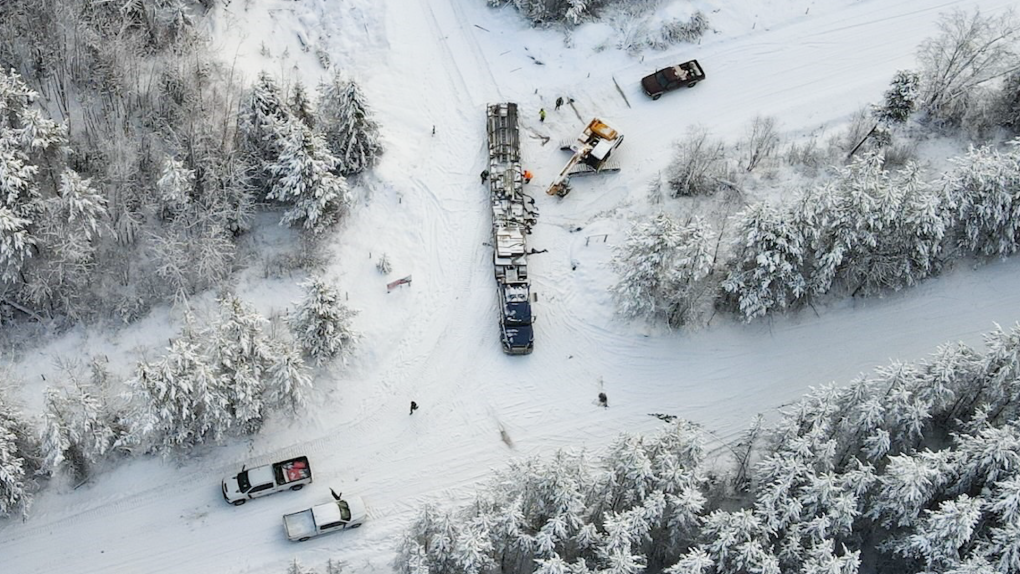 A photo provided by Rogers of the construction of the first new cell tower its installing along the Highway of Tears. (Source: Rogers Communications).

PRINCE RUPERT, B.C. -- Of the 720 kilometres of the Highway of Tears, about 252 of them are lacking reliable cell service.

But now, Rogers Communications has reached a new milestone in its plan to bring full cell service to the road, which carries a tragic history.

The company announced that construction has begun on the first of 12 towers it’s building between Prince George and Prince Rupert.

Dozens of women, the majority of whom were Indigenous, have been murdered or gone missing along this stretch of the Yellowhead Highway.

“At Rogers, we are deeply committed to reconciliation and to using our technology to help connect rural, remote and Indigenous communities,” said Jorge Fernandes, chief technology officer at Rogers, in a press release.

“It is our hope that by providing the safety of wireless connectivity along Highway 16, we can honour survivors, victims and their families and communities by taking action to address the tragic crisis of murdered and missing Indigenous women and girls here for the past many decades.”

Located west of Prince George, the first tower is set to go online by late January or Early February.

Rogers Vice-President of Access Networks Warren Fletcher says the next “two-to-three” towers are set to be completed around April, since weather is expected to make construction difficult.

“Now we're getting into the real difficult build time of the year. And three of the towers, for example, are helicopter build sites only – they're right on top of the mountains. So we need to wait until the weather is clear enough for us to fly the big helicopters in to drop the crews and the equipment onto the top of the mountains to start doing the construction on them,” he said in an interview with CFTK.

All 12 towers are expected to go online by the end of October.

“The reason why we’re driving and striving to get that is because, end of October, we hit another problem with the weather window where construction becomes very difficult.”

Additionally, Fletcher says it’s not just the weather that’s motivating them to get the towers up quickly.

“Every day that this coverage isn't there is a day that somebody still is potentially at risk on this stretch of the highway…. I’m driving to ensure that we minimize any potential delay and get on top of it, way ahead of schedule.”

Gladys Radek, an advocate for missing and murdered Indigenous women and girls who lost her niece Tamara Chipman along the highway in 2005, says she’s thrilled about the new cell towers.

“I know a lot of the stories from the Highway of Tears, and if a lot of those girls had cell phones back then, we could probably save some lives.”

Radek says she first promoted expanding cell service along Highway 16 back at the first Highway of Tears symposium in 2006.

However, she adds there’s more that needs to be to make the highway safer for Indigenous women, including paying attention to the 231 call to justice in the 2019 MMIWG report.

“We need other services and resources, like proper shelters [as well as] proper health, healing and wellness centers and stuff like that. Let's start working on those, so that we can start bringing our women back up to where they realize that they are actually valuable.”