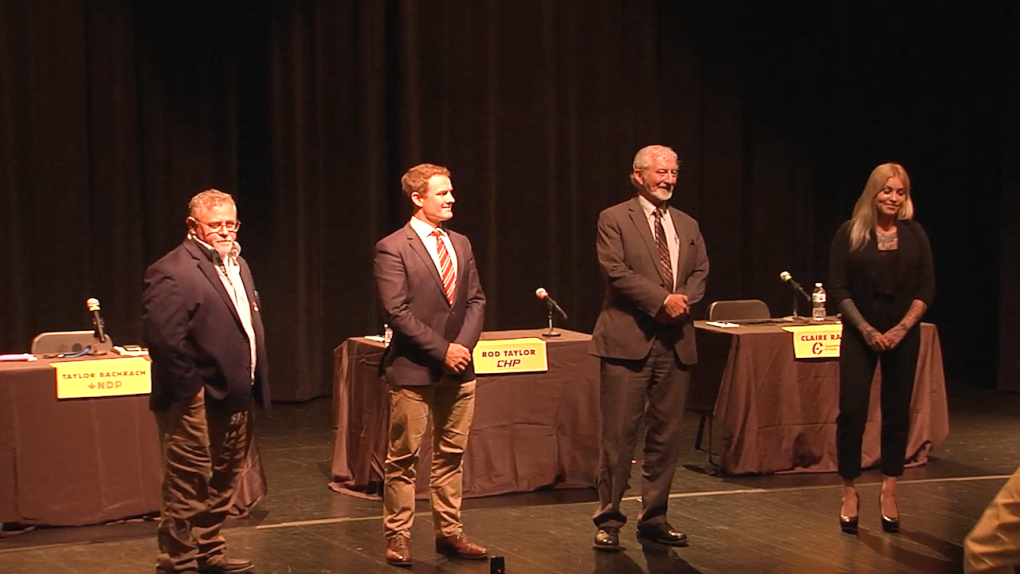 PRINCE RUPERT, B.C. -- Yesterday’s all-candidates debate at the REM Lee Theatre in Terrace showed there’s some common ground but also plenty of division between the candidates in Skeena-Bulkley Valley.

The debate was organized by the Terrace Standard newspaper and had different journalists from throughout the riding moderate each of the debate's five sections.

The event began with the section on industry. When asked about his views on LNG, riding incumbent and NDP candidate Taylor Bachrach didn’t directly say whether he was for or against LNG development, but instead talked about maximizing its benefits and minimizing its impacts.

“One of the big impacts is 4-million tons of greenhouse gases per year, and that calls on us as a country to redouble our efforts in almost every other sector,” he said.

“The Green Party have those transition plans in place, so that we can start looking to renewable energy and reducing the amount of development that is happening with pipelines today,” she said.

The Christian Heritage Party's Rod Taylor expressed his support for resource extraction, while the Conservatives' Claire Rattée stressed the importance of consulting with communities affected by industry project.

During the Indigenous affairs section, Rattée mentioned her party’s plan to invest in culturally appropriate treatment and mental health programs. She also critiqued the lack of action on transportation in the riding after almost two decades of NDP representation.

“We're seeing more and more women and girls going missing, and it feels like lip service is being paid to the families that are missing loved ones and nothing is actually changing,” she said.

“We have to look after their suicide rates,” he said. “We got to abolish the Indian Act, recognize the treaties and respect their land. Their health care – their diabetes, heart disease, all up. Education’s a key factor – they need higher education, less incarceration and so on.”

In the climate change section, many candidates expressed concerns about the Liberal government’s increased subsidies to oil and gas industries. Bachrach says he wants to see that money invested into green energy.

“We know that already in Canada, the clean energy economy is creating thousands and thousands of jobs,” said Bachrach. “Some of those jobs are right here in the Northwest.”

The Liberals were also attacked during the social issues section on theirs plans to create stricter gun laws.

“I've heard from many of the people that live in areas like Dease Lake and Iskut that if these measures were to go into effect, it would dramatically impact their ability to provide for their families,” said Rattée.

“Firearms are just a virtue signaling tool of the Liberals to say that they're doing something about a crime, and they're not,” he said.

Also during the social issues section, Bachrach promised to take action on the overdose crisis.

The last – and arguably most tumultuous – section of the debate was on COVID-19.

Bachrach defended the government's spending efforts and social programs throughout the pandemic, but Taylor raised concerns about the costs.

“We're over a trillion dollars in debt now because our Liberal Prime Minister, who is supported by his NDP colleagues, think that your money grows on trees, or you can just spend it and more will come in automatically,” he said.

Taylor and Craven also expressed their opposition to vaccine passports.

“I’d like to reiterate that we're 100 per cent against the vaccine passport, because it's our freedom,” said Craven.

“Once you give that freedom up, you become a police state and the government controls you.”

In contrast, Bachrach and Young encouraged people to get vaccinated.

“As an Indigenous woman, I can relate to what vaccines are and how they help,” said Young.

“The smallpox epidemic here on Haida Gwaii, I can go into history about that and what it is to be here at this time. Vaccinations are extremely important, and they are being developed and in place to protect us as a community.”

Rattée said that although she’s against mandatory vaccination policies, she didn’t want to politicize the issue. She encouraged Canadians to make the choices that feel right to them.

“I think that it's important that we get out of this pandemic, and that we start focusing on some of the other health issues that we're facing,” she said.

“We lose 17 Canadians a day to the opioid crisis. And yet, we're so focused on politicizing this issue that, for whatever reason, we can't seem to get back to work at a governmental level and work on any other issue.”

Liberal candidate Lakhvinder Jhah did not attend the event.