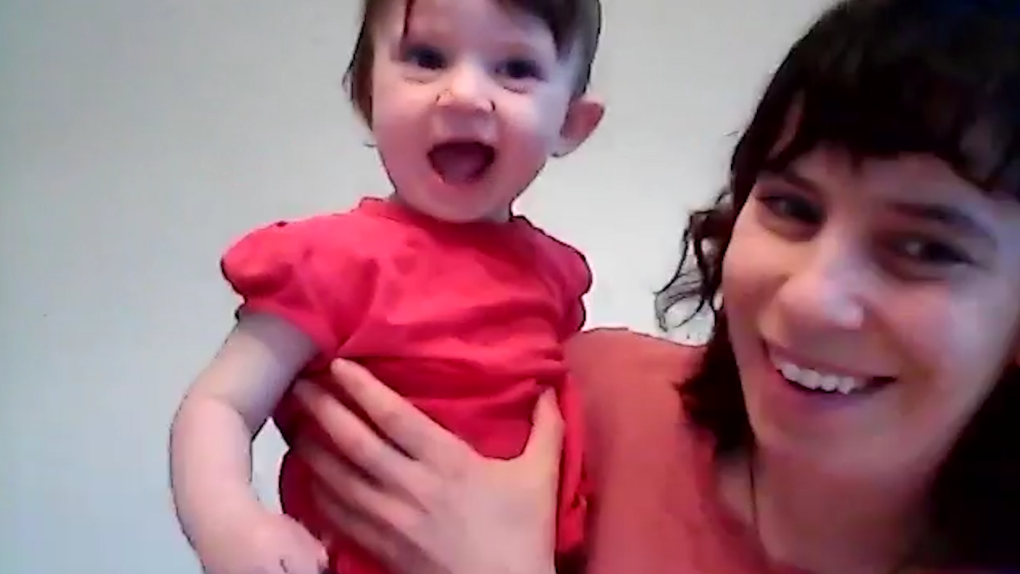 Lisa Feinberg and her 11-month-old daughter Zisel “Zeesy” Feinberg in a Zoom interview with CFTK-TV.

PRINCE RUPERT, B.C. -- Lisa Feinberg’s 11-month old daughter wasn’t even born yet when she secured her a spot at Bulkley Valley Little Horizons Daycare in Smithers.

But just a few weeks ago – and two months before she was set to return to work – she found out she lost the spot due to a staffing shortage.

“My stomach just dropped,” she said.

Likewise, Corbin Greening can’t even find a childcare spot for his daughter to begin with.

“We started calling and eventually heard that the wait lists were years long, and that there was no opportunity for us the way things currently sat to get our daughter into any daycares,” he said.

The struggle to find childcare in the town inspired them and over 20 other parents to sign an open letter to politicians that raises concerns about what they describe as a childcare crisis in Smithers and urges all three levels of government to take political action to address it.

“This fall, we found out on short notice (in some cases, days’ notice) that our children no longer had a placement at one of the Smithers daycare centers due to staffing shortages. As a direct result, many of us have no option but to reduce our work hours or leave our jobs, and some of us are considering leaving the community,” reads the letter.

“We are the working parents of young children. We are your social workers, healthcare professionals, lawyers, teachers, managers, civil servants, planners, foresters, and administrative support. We depend on childcare to provide the services that this community needs.”

Little Horizons is the only childcare facility in Smithers that provides services to infants and toddles under 30 months of age. Director Michelle Storey says Northern Health’s licensing office usually gives exemptions to staff members who are only partway through their early childhood education studies.

But this year, she says they were told by Northern Health they wouldn’t be getting any more exemptions.

“If somebody’s doing their schooling, they’re usually pretty good about giving exemptions so they can act as a certified [early childhood educator] or act as a certified infant and toddler person, but they've really clamped down. I'm not sure what their reasoning is because childcare is something that’s really needed,” she said.

She estimates that around 40 families have been affected by this.

Beyond that, Storey says it’s hard to find staff.

“We've tried to put it out there that we're hiring. We pay for their schooling, but it’s hard to find people that are actually interested in coming and doing it.”

A written statement from Northern Health says there has been no change to how the health authority reviews these requests.

“Exemptions related to childcare licensees are carefully considered on a case-by-case basis, recognizing that exemptions allow for licensees to operate under minimum standards of care. There has been no change to how NH approaches such requests, which are all assessed thoroughly to balance the need for an exemption against any increased risk to those in care,” it says.

“Licensees are always welcome to apply for exemptions, and we encourage Licensees to work with their Licensing Officer to support successful outcomes for those in care.”

“But if you deliver $10-a-day childcare but you're only meeting the needs of 75% of the families who need childcare, the other 25% don't have affordable childcare. They have no childcare. So we need to make sure that there's enough spaces to meet the demand in communities.”

Mayor Gladys Atrill says she’ll advocate for more spaces, but adds that there’s only so much the town can do financially without a potentially-controversial tax increase.

“We don't have enough of the specialized childcare providers that are needed, particularly in infant and toddler [spaces],” she said. "That's not something that we can fix on our own”

Stikine MLA Nathan Cullen says the BC NDP has made major investments in childcare since taking office.

“Even in Smithers alone, we created 182 new childcare spaces,” he said.

“That being said, even with all those investments and all that work, we know that there's more to do and we're doing it. It's challenging work because we’re making sure that we have enough people to fill the spaces that we're funding and making them affordable.”

As for Feinberg, she still plans to return to work next month, but she’s not sure what she’s going to do for childcare.

“We're looking at a number of possibilities, including whether one of our parents will come from Toronto to help out, or whether my spouse will have to cut back on his work. We're also looking at the possibility of a nanny share, but it's very expensive and very hard to find people,” she said.

“We're looking at all the options, but none of them are good.”