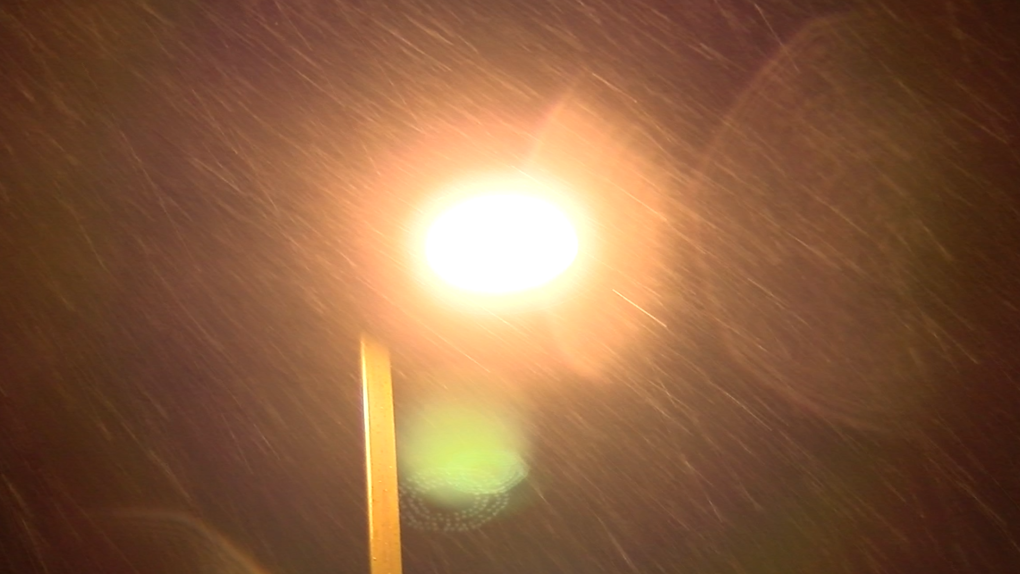 A streetlight illuminates the rain during intense weather in Prince Rupert. (Joshua Azizi/CFTK).

PRINCE RUPERT, B.C. -- Prince Rupert is no stranger to wind and rain, but the heavy winds currently pelting the city have created a fair amount of damage.

Environment Canada issued a wind warning at 2:16 p.m. this afternoon that said a “vigorous frontal system is producing very strong southerly winds” along coastal sections of the North Coast. It says winds were expected to gust up to 110 kilometres an hour.

The strong winds caused a container vessel at the Fairview Container Terminal to break from its moorage.

“At approximately 2PM today, strong winds caused the container vessel MSC Altair to break its lines from where it was berthed at Fairview Container Terminal and grounded on the eastern side of nearby Digby Island,” says a statement from the Prince Rupert Port Authority.

“Multiple tugs have refloated the vessel and it’s now under its own power and will be moving safely to anchorage. No injuries have been reported. Initial reports indicate no significant damage to the vessel and no indications of marine pollution are apparent.”

Meanwhile, Northern Health had to briefly close off access to its main patient and staff parking lot due to concerns over structural damage. In particular, the health authority was concerned that damage from the building’s roof could fall onto the ground.

The parking lot was re-opened at 4:15 after Northern Health said the issue had been resolved.

There are currently over 1,600 customers in Prince Rupert without power, according to B.C. Hydro. Although the cause for two of three listed outages is still under investigation, one outage – which is currently affecting 180 customers – notes that a power pole has fallen down.

A previous outage in the city which was restored at 4:12 p.m. had affected 1055 customers. B.C. Hydro says the cause was an “object on our wires.”