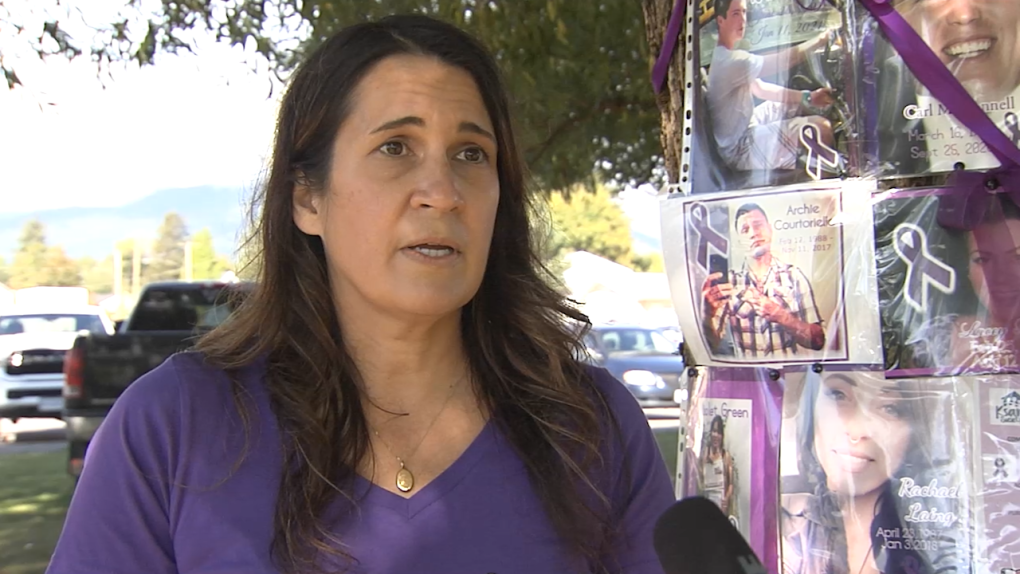 Terrace resident Lana Greene lost her son TJ earlier this year after he took his own life in a remand facility. She attributes his death to his struggle with substance use and his shame over his addiction. (Photo source: Steve Ross/CFTK).

The event was put together by two Terrace-based organizations – Kermode Friendship Society and Ksan Society – as well as Moms Stop the Harm, a national group formed by mothers who lost children to the overdose crisis.

It featured drumming, speeches and plenty of purple ribbons, which pay respects to those who died from drug poisonings. Northern Health also ran a training session on how to use Naloxone, which reverses the effects of an overdose.

Moms Stop the Harm member Lana Greene lost her son TJ earlier this year. She says he struggled with depression and bipolar disorder, which led him to self-medicate with substances.

“The system’s failing,” she said. “There were several times he took himself to detox in the last year of his life – we were met with six to eight-week waiting times for a treatment bed. People need access to treatment when they’re ready.”

Greene says he ended up in a remand facility, where he asked for psychiatric help and Suboxone to treat his addiction but couldn’t gain access to either.

It was in that facility where he took his life in January. It wasn’t an overdose, but Greene attributes his death to the harms related to substance use and the stigma that comes with it.

As the federal election continues, Greene says politicians are overlooking the issue of overdoses.

“I would like it more acknowledged that we're losing six people a day in this province. That’s the numbers, and they’re going up.”

At yesterday’s event, Kermode Friendship Society board member Sharon Bryant led the crowd in a prayer for those affected by the overdose crisis.

For anyone struggling with addiction, she says it’s okay to reach out for help.

“You don't realize just how much support you need until you start sharing your story and sharing your grief and your hurt,” she said in an interview.

The B.C Coroners Service announced yesterday at least 1,011 people have died in the first half of 2021 due to the province’s poisoned drug supply. 65 of those deaths happened in the Northern Health region – the Northwest and Northeast each recorded 16 overdose deaths, while the Northern Interior reported 33 deaths.