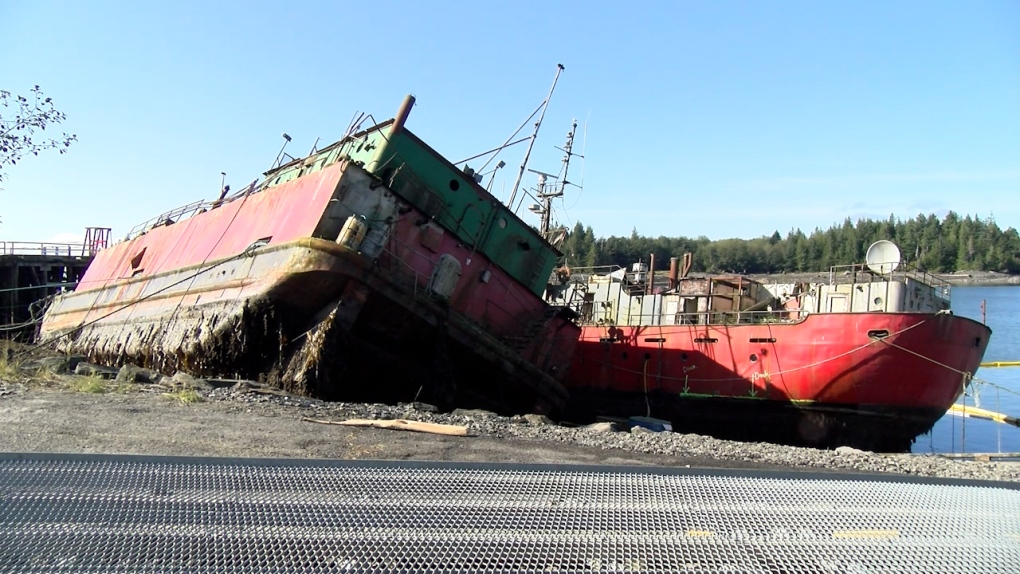 The two former fishing boats broke from their moorings and beached themselves at Porpoise Harbour in Port Edward on Wednesday morning.

PRINCE RUPERT, B.C. -- Two abandoned marine vessels broke loose from their moorage at the Porpoise Harbour boat launch in Port Edward on Wednesday morning and crashed into the dock before beaching themselves at the boat launch.

A statement from the district says the boats were previously used in the fishing industry but were abandoned in the harbour fourteen years ago.

The harbour is under the jurisdiction of the Prince Rupert Port Authority and the federal government, but Bjorndal says the area hasn't been well-maintained.

"The Port Authority and Coast Guard have been monitoring the vessels, but the thing I see is that nobody maintained the docks they were tied up to and the docks finally rotted out," he said. And when that let go, the vessels just beached themselves.”

The fuels and fluids from the boats were previously drained due to environmental concerns, but Bjorndal says he's concerned about remaining fuels, fluids or hydrocarbons in the boat that could leak and become an environmental hazard.

He says he wants to see action taken quickly to take care of the mess.

"Our concern, though, is the speed at which nothing is happening. These vessels now have been sitting on rocks for the last couple of days, and the bottom is starting to crumble on this inside vessel,” he said.

“We need to do something in a real hurry, because these things just won't last banging around on rocks. You don't have to be a rocket scientist to figure out steel barges and rocks just don't mix."

In a written statement to CFTK, Prince Rupert Port Authority Vice-President of Public Affairs and Sustainability Ken Veldman says the port has responded to the two vessels and that the situation is currently stable.

"PRPA has been active in trying to remove the unauthorized vessels from PRPA property for several years, and has worked with partners, in particular the Canadian Coast Guard, to ensure interim monitoring and preventative mitigation measures were in place. While PRPA has been involved in the initial response, it is expected the Canadian Coast Guard will manage the response operation and cleanup as required,” he said.

The boat launch at Porpoise Harbour is now closed to the public until further notice, and the road to the harbour – Porpoise Dr. – is closed as well.