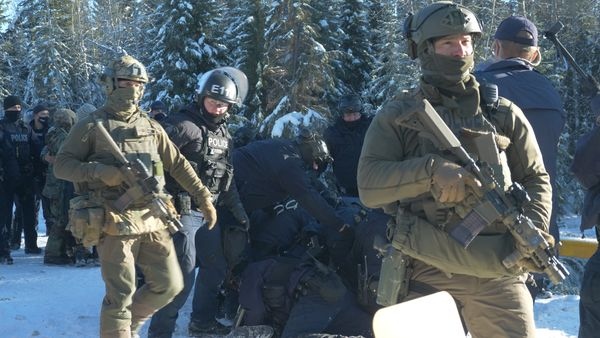 PRINCE RUPERT, B.C. -- UPDATE -- Nov. 19th: An RCMP press release issued on Thursday at 6:20 p.m. says 14 people were arrested as part of an effort to clear the ongoing blockades against the Coastal GasLink pipeline. The individuals were transported to the Houston RCMP detachment and are being held in custody to appear before the B.C. Supreme Court today.

RCMP also denies that police were preventing food and medical supplies from reaching the protestors' blockades. They said medical supplies and food items could be dropped off at the police Access Control Point and individuals could pick the items up on the other side of the blockade.

Police say resources will be in the area moving forward to ensure the roads remain accessible.

The conflict unfolding between the Wet’suwet’en Gidimt’en Clan and Coastal GasLink is reaching a boiling point, as RCMP have begun moving into Gidimt’en territory and arresting people.

The Gidimt’en Checkpoint’s social media page says 15 people have been arrested but no charges have been laid. They say the arrested people will be brought to bail hearings in Smithers tomorrow.

CFTK-TV reached out to an RCMP spokesperson to confirm this, but they weren’t able to provide any further information.

In a press release issued this morning, the RCMP says they were called in to assist with the ongoing conflict, as blockades on the Morice River Forest Service Road have locked in several hundred Coastal GasLink workers.

The Gidimt’en Clan announced on Sunday they were evicting Coastal GasLink workers from their territory. By the end of the day, two blockades had been put up on the Morice River Forest Service Road, where pipeline work was ongoing.

Police say they’re enforcing a Supreme Court injunction barring protests from disrupting work on the Coastal GasLink pipe and that they’re planning a rescue mission for the camp workers.

In an update from 3 p.m. today, Coastal GasLink says the RCMP have now cleared the road and are bringing food, water and supplies to the pipeline workers.

Despite the presence of police, the pipeline’s opponents remains defiant.

“This injunction does not stand and has no authority on Wet’suwet’en land,” said Gidimt’en Checkpoint spokesperson Sleydo’ in a video released just before the arrests were reported.

Sleydo’, whose English name is Molly Wickham, says Coastal GasLink was given time evacuate their workers when they announced the eviction order.

“We gave CGL 10 hours to vacate the territory, enforcing the eviction from January 4th 2020. They had every opportunity to leave, and the company was irresponsible in not facilitating them leaving. And so they're going to use that to justify the violence that they're going to bring here onto our territories.”

The RCMP have also set up a blockade at the 29-kilometre mark on the road. Gidimt’en Checkpoint Media Coordinator Jennifer Wickham was previously denied access through the blockade to bring in supplies and medication. The Gidimt’en Clan says the elder who that medication was for was arrested today.

“We want to make it absolutely clear that the actions of a few members of the Gidimt’en Clan who claimed to evict Coastal GasLink and the RCMP from the headwaters of the Morice River (Wedzin Kwa in our language) do not represent the collective views of the Clan or of most Wet’suwet’en people,” reads the statement.

“Even though we are also members of the Gidimt’en Clan, the protesters at the “Coyote Camp” and other protest sites have never consulted us about their actions and cannot claim to represent us or any other members of the First Nation.”

Coastal GasLink says that the road is not yet secured for public travel, but the company will continue to provide further updates as the situation develops.