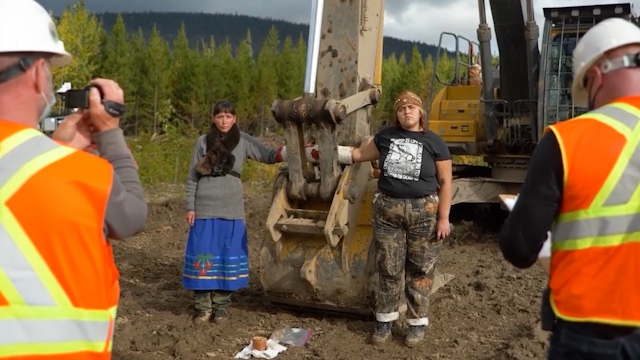 Gidimt'en Checkpoint spokesperson Sleydo’ (left) and a supporter from the Gitxsan Nation recently tied themselves to heavy machinery as part of an ongoing blockade on the Morice River West Forest Service Road. (Photo source: Gidimt'en Checkpoint).

TERRACE, B.C. -- Conflict is once again brewing on the Morice River West Forest Service Road near Houston over the construction of the Coastal Gaslink pipeline.

Members and allies of the Wet’suwet’en Gidimt’en Clan’s checkpoint at the road’s 44-kilometre mark have set up a blockade at the 63-kilometre mark to prevent Coastal Gaslink from drilling underneath the Morice River.

Gidimt'en Checkpoint media spokesperson Jennifer Wickham says they are concerned about how the drilling could affect the river’s salmon populations.

“It's also one of the last places that I know of, personally, where you can drink the water directly from the river. So it's clean drinking water, and we know from all of the droughts and all of the environmental catastrophe that is happening right now on our planet that that's a really rare source. So we want to protect it for our future generations,” said Wickham.

“So this really is a last attempt to physically block the drilling under the river.”

Over the weekend, protestors blocked the road with a bus that had someone locked down underneath it. However, Wickham says the bus was eventually removed and the person was arrested.

A second blockade referred to as the “beaver dam” was later put up, which has someone inside of it as well.

Individuals have also locked themselves down to heavy machinery as a way to prevent access to the road.

“We are upholding Wet’suwet’en law and asserting our rights and title that are acknowledged in the he Delgamuukw-Gisday’wa court case,” said Wickham.

“And Coastal Gaslink failed to uphold their end around free, prior and informed consent from the hereditary chiefs of the Wet’suwet’en people, who are the rightful rights and title owners of this territory.”

RCMP spokesperson Madonna Saunderson confirmed protestors have blocked access to the site and that efforts have been ongoing to negotiate with the group to leave the area.

She says two individuals have been arrested as of Tuesday. Both are charged with breaching an injunction and one is charged with allegedly assaulting a police officer.

“The protestors remain on scene and, as a result, there is no active construction by CGL at this time,” she said in a statement from Tuesday.

"There is no planned police enforcement of the BC Supreme Court injunction order today [September 28th], however, there is a police presence in the area and our Division Liaison Team is engaged. Efforts are being made to speak with the Hereditary Chiefs regarding this matter.”

Robinson says crews are utilizing a trenchless, micro-tunnel method that is constructed below the riverbed and doesn't disturb the stream or the bed and banks of the river.

She says this method was determined to be the most environmentally friendly way to cross the river.

“Our top priorities are the safety of our people, local and Indigenous communities and protection of the environment. We respect the rights of others to peacefully and lawfully express their point of view and understand that there is opposition to the Project,” she said.

“Coastal GasLink’s activities are permitted and in order to safely conduct our work, an enforceable injunction is in place that prohibits interference with our construction activities, including those within the vicinity of the Morice River.”