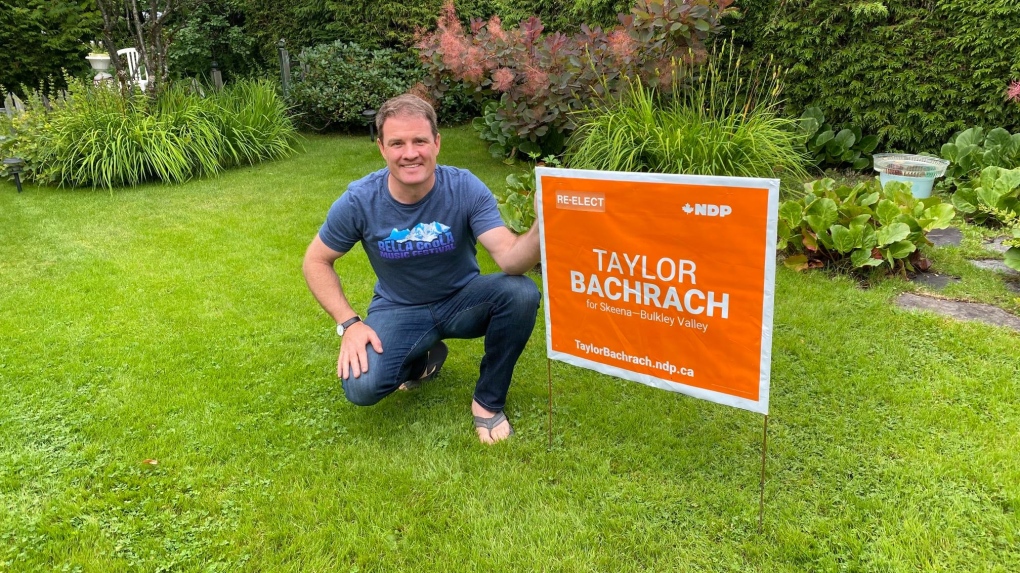 The NDP's Taylor Bachrach stands next to a lawn sign with his name on it. The former Smithers Mayor is up for re-election to win the Skeena-Bulkley Valley riding in this year's federal election. (Photo source: Taylor Bachrach/Facebook).

PRINCE RUPERT, B.C. -- A federal election is underway, and there’s plenty of competition in the Skeena-Bulkley Valley riding.

The NDP’s Taylor Bachrach has served as the riding’s MP since late 2019, when he left his position as the Mayor of Smithers to run for parliament in that year’s election.

“This is a really pivotal time in Canadian history,” said Bachrach.

“The pandemic is the most immediate concern, but also things like the climate crisis, reconciliation and building an economy that not only provides opportunities for every Canadian, but also comes with the expectation that the wealthiest corporations and the most well-off Canadians pay their fair share.”

Bachrach’s closest competition will likely be Claire Rattée from the Conservative Party. A former councillor for the District of Kitimat, Rattée ran against Bachrach in the 2019 election but lost by just under eight per cent of the vote.

This time around, she senses that people are ready for change in the riding.

“A really big focus for me is focusing on securing a stronger economy in this region – obviously all throughout Canada, but especially here, because that's my focus,” she said.

“I want to see more focus put on different projects that are Indigenous-led – Indigenous partnerships, especially. I think that's the only way that we're really going to see this area begin to thrive.”

Young says she’s running because she sees herself in a lot of the people in the riding, who she says are trying to make ends meet and want to keep the planet inhabitable.

Also in the running is Jody Craven from the People’s Party. He’s concerned about policies meant to make COVID-19 vaccines mandatory in certain sectors, and he fears the Liberals will expand those policies.

“[Trudeau is] already trying to take away a lot of our freedoms," he said. "So if he gets a majority government, what’s stopping him? The NDP already announced they'll go alongside with the Liberals, so now we're facing two fronts.”

Also wary of mandatory vaccine policies is Rod Taylor, the leader of the Christian Heritage Party and its candidate for Skeena-Bulkley Valley. Taylor says his party is against abortion, same-sex marriage and medical assistance in dying. He’s also concerned about government debt.

The Liberals have not yet nominated a candidate. CFTK has reached out to a Liberal Party representative for further comment.

While the candidates in this year’s election have plenty of different opinions, there’s one thing they’re united on: they’re not a fan of Trudeau’s decision to call an election.

“He's seems to have his own agenda here and isn't taking into consideration the way other Canadians are feeling, especially here in British Columbia,” said Rattée .

“I can't find very many people who are excited about the prospect of an election during the fourth wave. It's really an election that only the Prime Minister wants. But at the same time, elections are an opportunity to talk about the things that really matter – to talk about the future of our communities here in the Northwest.”

The Skeena-Bulkley Valley riding was formed in 2004, when Nathan Cullen won the seat for the NDP. Cullen held onto the riding until 2019, when he decided to leave federal politics.

In the 2019 election, the NDP’s Taylor Bachrach won the seat with 40.9 per cent of the vote. Claire Rattée earned 33.2 per cent of votes, while Liberal candidate Dave Birdi won 11.6 per cent and the Greens’ Mike Sawyer won 7.9 per cent.

The PPC’s Jody Craven and Rod Taylor from the CHP ran in that election as well – both earned 3.3 and 2.3 per cent of votes, respectively. Independent candidates Danny Nunes and Merv Ritchie each won 0.4 per cent of the vote.