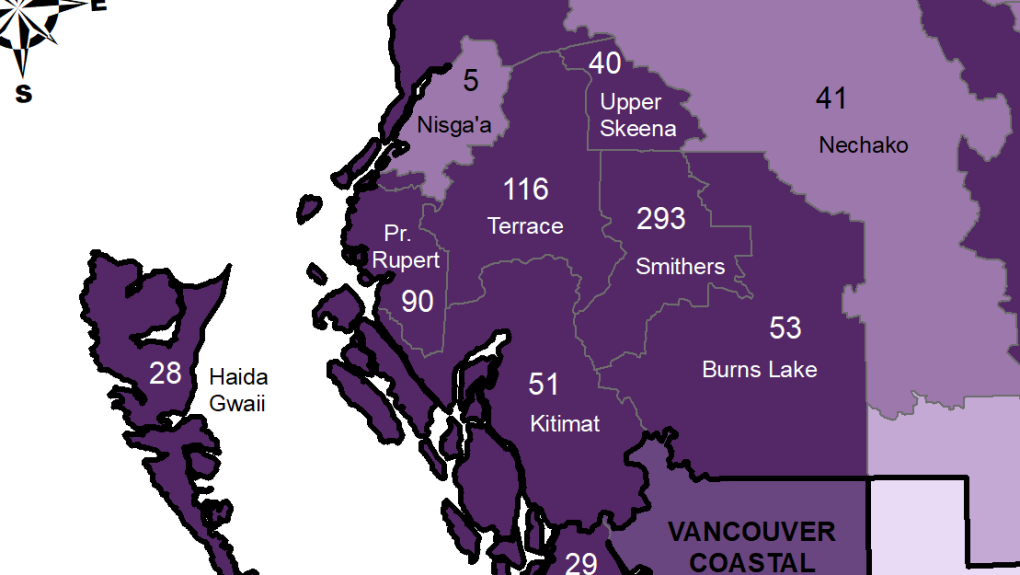 (Source: BC Centre for Disease Control).

New data from the BC Centre for Disease Control shows COVID-19 cases are spiking in the northwest, and many regions are reporting record weekly highs of new cases.

Most notably, Smithers reported the second-highest per capita rate of new cases in the entirety of British Columbia

From January 9th to 15th, 293 cases were reported in the Smithers Local Health Area (LHA), which also includes Houston, Telkwa and Witset.

Meanwhile, the Upper Skeena LHA – which includes the Hazeltons and surrounding First Nations communities -- had the third-highest COVID-19 case rate in the province. It recorded 40 new cases last week, with a rate of 124 cases per 100,000 people.

The case counts reported last week for these four regions – Smithers, Upper Skeena, Terrace Burns Lake – are also record weekly highs for each of them.

The rest of the northwest is struggling with COVID-19 as well. Prince Rupert recently saw its highest weekly case count since March, with 90 new cases last week.

There were also 41 new cases in Nechako and five in Nisga’a.

Fortunately, unlike in Metro Vancouver, hospitalizations have so far not dramatically increased in the north.

33 people are currently hospitalized with the virus in Northern Health, making up less than four per cent of all hospitalizations in the province.

The Northern Health region makes up around six per cent of B.C.'s population.