Anti-vaccine passport rally held in Terrace and across BC 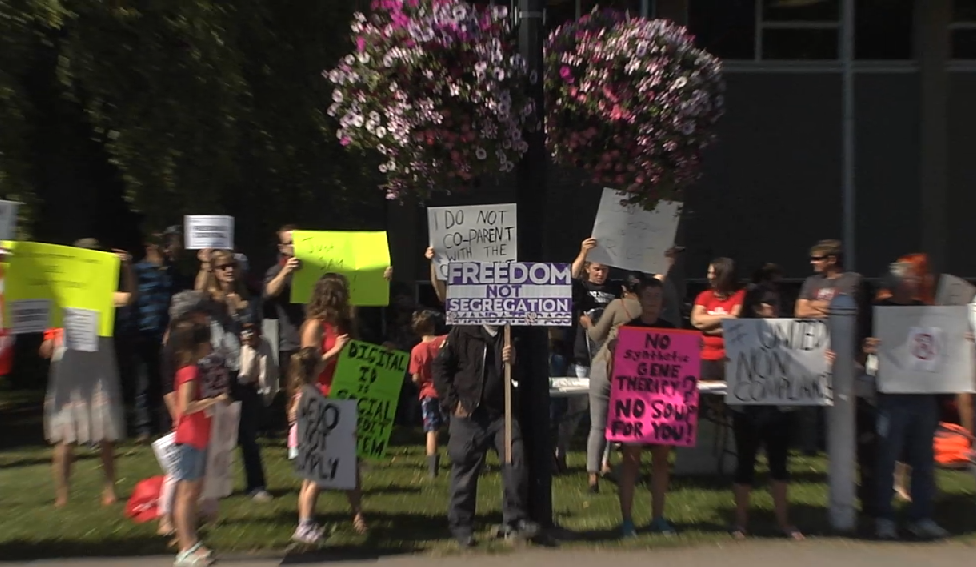 TERRACE, B.C. -- A group of sign-waving protesters gathered in front of Terrace City Hall yesterday, as part of a province-wide series of demonstrations against the BC government's vaccine passport system, which will be implemented in a few weeks.

Beginning September 13th, people will be required to show proof of vaccination against COVID-19 to participate in non-essential activities, such as visiting restaurants, gyms and movie theatres.

But rally organizer Brittany Kinahan says, while she isn't necessarily opposed to vaccinations, she's against forcing people to get the shot, "because it's unconstitutional, because it excludes people from society who have paid into their local municipalities so now they no longer have access to any of those amenities, it's going against a person's right to choose whether to be vaccinated or not, to choose whether to have a medical procedure or not, which then goes against our Charter of Rights and Freedoms and personal health codes."

Rally participant Barry Prince called the vaccine passport an infringement on the freedom of Canadians, and he vowed there will be more protests.

"I'll tell ya the next one we have here I guarantee will be twice this size as Canadians are really starting to get very very annoyed, and that would be an understatement, at the tyranny being brought down on us by this government under the guise of COVID-19 and medical passports," he said.

The protests come as COVID numbers continue to rise across the province -- including the northwest.

During the seven-day period last week (August 22-28), 19 new cases of the virus were reported in Terrace and 17 in Smithers.

Kitimat added 9 cases during that period, Prince Rupert 8, Nisga'a 4, the far Northwest 3, and Burns Lake and Upper Skeena 2 each.

In the daily numbers released yesterday, BC reported 785 new cases of COVID-19, with 199 people in hospital and 112 of those in Intensive Care.

Two more people have died of complications due to COVID.

Dr. Katharine Smart, the CMA President, told CTV Your Morning that the fourth wave of the pandemic is being driven by undervaccination, and we need to vaccination rates up to over 90%.

She says vaccine passports would encourage people to get the shot.