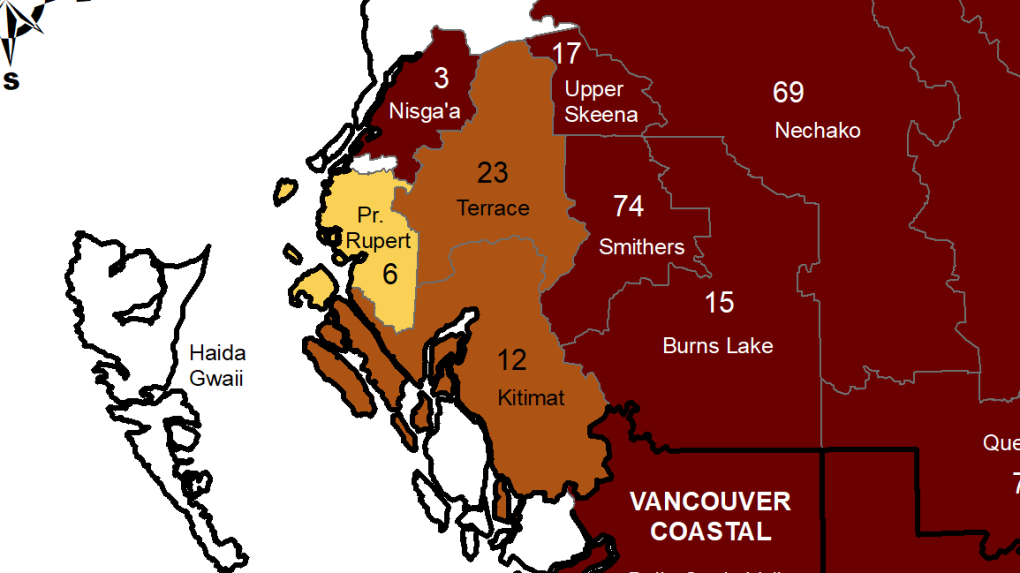 TERRACE, B.C. -- The B.C. Centre for Disease Control is reporting another week of high COVID-19 case counts in the Bulkley-Nechako region.

From September 12th to 18th, 74 new cases of the virus were reported in Smithers. That's down from 117 new cases in the previous week

Upper Skeena recorded 17 new cases, up from 5 in the previous week.

Closer to the coast, per capita rate of new cases are mostly lower.

There were 23 new cases in Terrace last week, 12 in Kitimat, six in Prince Rupert and three in Nisga'a.

In all four of these regions, there's been a moderate increase in cases from last week.

88 per cent of British Columbians have received at least one vaccine dose, while 81 per cent are fully vaccinated.

But in the North, many Northwest regions continue to lag behind the provincial averages.

Kitimat continues to have the second-highest first-dose vaccination rate, with 96 per cent of eligible resident having received at least one shot, while 81 per cent are fully vaccinated.

Haida Gwaii is close behind, at 88 per cent for first dose and 80 for second doses.

For Terrace and Upper Skeena, around four-fifths of residents have had at least one dose, while 71 per cent are fully vaccinated.

Both areas have second dose rates of 64 per cent.