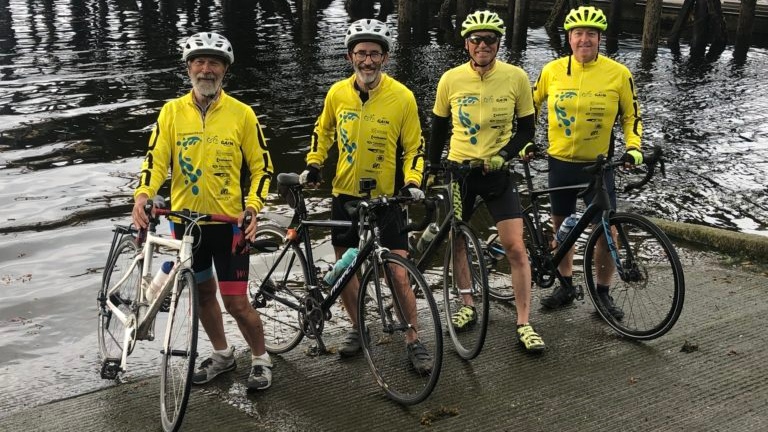 The Cycling for Water team is currently embarking on a "Sea 2 Sea 2 Sea" journey from Dawson City to Prince Rupert to the Atlantic Ocean. (Photo source: Cycling 4 Water).

PRINCE RUPERT, B.C. -- A group of cyclists passed through Northwest B.C. this weekend on a cross-country journey to raise money for clean drinking water.

The Cycling 4 Water team is currently embarking on a "Sea 2 Sea 2 Sea" bike ride across Canada. The group began their trip at the Yukon River in Dawson City and cycled down to Prince Rupert to dip their bikes into the Pacific Ocean. They're now making their way east to the Atlantic.

The cyclists have partnered with the Global Aid Network in their fundraising efforts to build 65 clean water wells for African villages.

Mike Woodard is one of the cyclists on the trip.

"When I was training one day, I was picturing going across Canada -- sun in my face, wind in my back, training at 6:30 in the morning, going uphill, the wind is against me, and it started to rain,” he said in an interview with CFTK.

Woodard says the northern section has probably been the trip's most grueling section due to headwinds, long distances and small populations. That being said, he also says the trip has been fun, and that the group has encountered plenty of encouragement and generosity from the people they've met along the way.

The group has raised close to $175,000 so far, which Woorard says is enough to cover 33 wells. He's optimistic the group could surpass their 65-well goal.