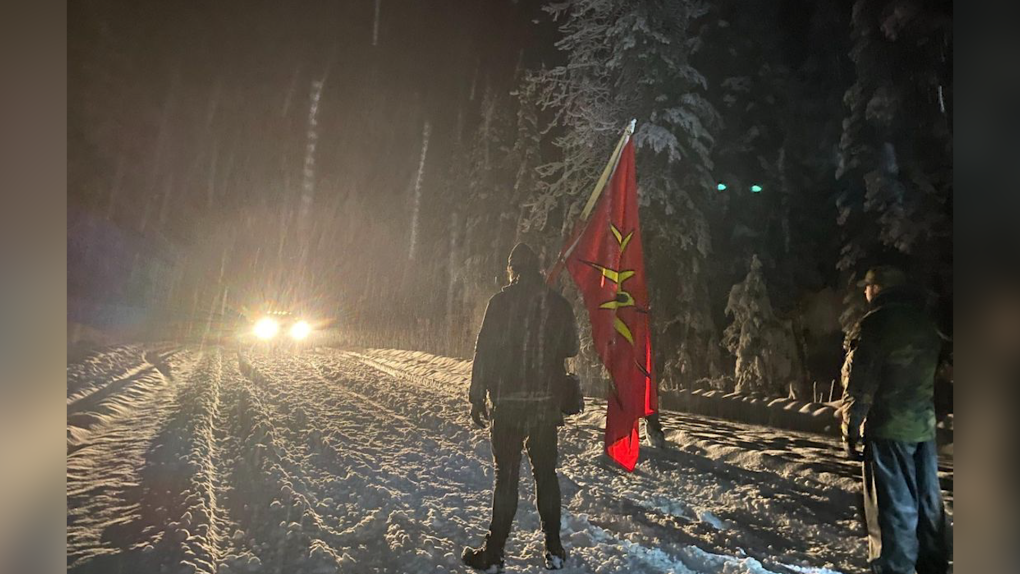 A photo shared by the Gidimt'en Checkpoint on Facebook announcing that the Morice River Forest Service Road has been disabled, following the issuing of the eviction notice and the creation of new blockades on the road.

PRINCE RUPERT, B.C. -- Tensions have once against increased over the construction of the Coastal GasLink pipeline through Wet’suwet’en territory.

On Sunday morning, the Gidimt’en Clan enforced an eviction order that was issued in January 2020 and ordered all Coastal GasLink employees to leave its territory.

“The investors and people that are planning on profiting from this project need to know that the resistance will not stop,” said Gidimt’en Checkpoint spokesperson Sleydo’.

“It will continue and, in fact, it will increase.”

Sleydo’, whose English name is Molly Wickham, says Gidimt’en Clan supporters have built blockades on both sides of its territory and are turning around traffic at the 39-kilometre mark on the Morice River Forest Service Road, which she says has halted work on the pipeline.

However, she says pipeline workers remain in their work camps, which lie past the blockades.

“We blocked off both sides of the territory, so they can't come in or go out from our area, but they've continued to just stay in their man camps.”

The eviction notice inspired Gitxsan Nation members to hold a rail blockade in New Hazelton on Sunday in solidarity with the Wet'suwet'en.

“I stand here because my grandparents would be down there. They would be doing this. It would’ve been done a long time ago,” said SaNel'En Rose Austin, a participant in the rail blockades, in a live video on Facebook.

These new developments also come 50 days after the establishment of the Coyote Camp blockade, which Sleydo’ says has prevented Coastal GasLink from drilling underneath the Morice River.

In an online statement, Coastal GasLink says it is concerned for the safety of its workforce due to the new blockades, which have blocked access to two lodges housing more than 500 workers.

“There are safety hazards on the forest service road resulting from felled trees. Project vehicles and equipment have also been vandalized in the area. These unlawful actions have put our people in danger, stranding them at work lodges where supplies will run out in the coming days and limiting their access to medical care in the event of an emergency,” reads the statement.

The company also says despite these new developments, an enforceable Supreme Court injunction is in place, which allows Coastal GasLink continued access in the area.

“This project is fully authorized and permitted by the federal and provincial governments and has the unprecedented support of local and Indigenous communities and agreements with all 20 elected Indigenous groups across the 670 km route.”

"Yesterday's blockades of the Morice River Forest Service Road have put at risk emergency access and the delivery of critical services to more than 500 Coastal GasLink workers, and the good faith commitments made between the Office of the Wet'suwet'en and the Province of B.C. to develop a new relationship based on respect,” he said in a news release.

Sleydo’ says Coastal GasLink should have removed their employees from the camps when the eviction was announced.

“I don't think that it was a very good decision to keep employees in the territory. We gave them ample notice. We gave them a really great amount of time to remove themselves from the territory, and they didn't take advantage of that. I don't think that that was very responsible, on the behalf of coastal GasLink, for their employees. I think that that was a very irresponsible move on their part.”

Ultimately, she says the Gidimt’en Clan is not backing down.

“People should understand that this is an ongoing, bigger struggle than what we've seen in the past, and that the protection of our rivers are of most important to us and that we will continue to advance our position under Wet’suwet’en law.”

In regards to the rail blockade in New Hazelton, a spokesperson from CN Rail said the company is aware of the situation and that it continues to monitor it closely.