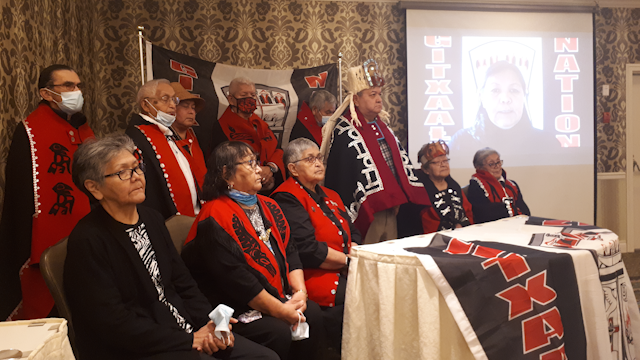 Gitxaala Nation leadership at a press conference on October 26th announcing the legal challenge against the province. (Source: Gitxaala Nation).

PRINCE RUPERT, B.C. -- The Gitxaala Nation has filed a petition to the B.C. Supreme Court that asks it to overturn seven mineral claims on Banks Island – located south of Prince Rupert – and prevent any more claims from being issued on its territory.

"These mineral tenures are dispossessing our people from Banks Island, which is the heart of our territory"

The legal challenge centres on the Mineral Tenure Act, which allows anyone to stake a minerals claim in B.C. using an online service.

Advocates have targeted the act in recent years, arguing it allows companies to skip consultation with First Nations.

“These mineral staking claims occur in real time [with] the click of a mouse,” said Innes. “It doesn't give Gitxaala the opportunity to participate, to have any say. It basically is a breach of the Crown's constitutional duty to consult with Gitxaala Nation.”

“It’s, in our opinion, so flagrantly unconstitutional because of the total lack of notice or consultation to affected First Nations on unceded territory,” said Ruben Tillman, a lawyer on Gitxaala’s legal team for the case.

“There's been a whole lot of conversation over the past few years about this topic,” she said.

Johnston says it’s the norm for mining companies to engage with local First Nations before or after a stake is claimed.

“We go out and we engage. We talk to all stakeholders that are out there, whether that be First Nations groups, or any other group that might have overlapping tenure.”

But Innes says neither the province nor any mining companies in the court challenge have consulted with the nation.

In a statement, the Ministry of Energy, Mines and Low Carbon Innovation said it can’t comment on matters before the court. However, it says it is committed to consultation with First Nations.

“While government reviews the feedback on the draft plan and works to finalize the province-wide Declaration Act Action Plan, the Ministry will continue to work collaboratively with First Nations on initiatives that advance their interests with respect to reforming the mineral tenure system, including modernized land use planning and other initiatives intended to safeguard sensitive ecological and cultural values.”

It also notes that the Ministry had previously engaged in initial discussions on the Mineral Tenure act and potential reforms to the mineral tenure system in 2018 and 2019.