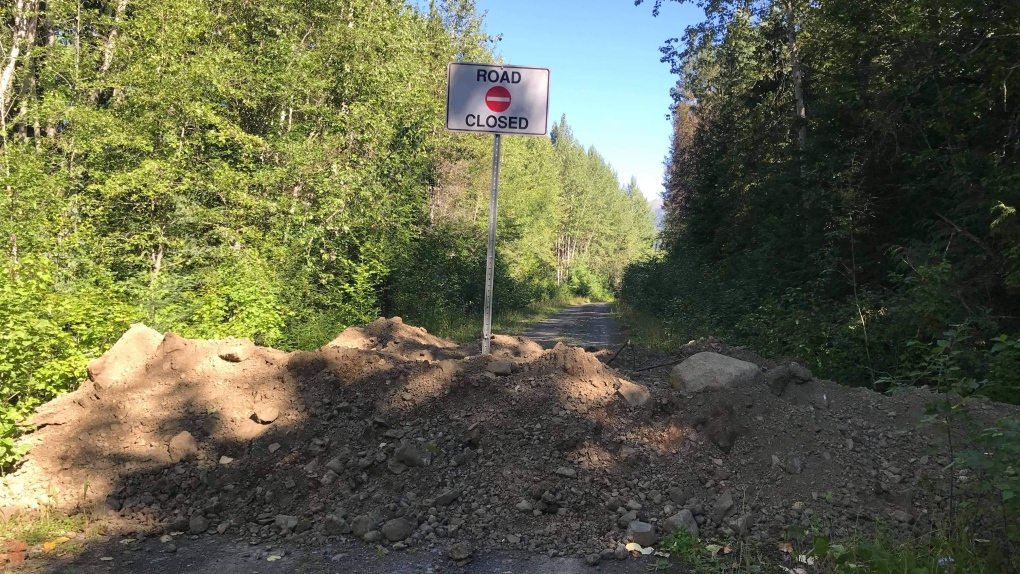 The Wilp Luutkudziiwus says a road closure on the Suskwa Forest Service Road -- which is reinforced with a trench at the 18km mark -- is preventing them from accessing their traditional territories. (Photo source: Pansy Wright-Simms).

PRINCE RUPERT, B.C. -- A Gitxsan house group is calling on the provincial government to restore access to the Suskwa Forest Service Road (FSR) east of Hazelton, after the province dug a trench at the 18km mark in the road to prevent vehicle traffic while they conduct maintenance on the road.

The Wilp Luutkudziiwus says the road closure is cutting off access to their traditional territories and interfering with their cultural practices.

In particular, the house group says the roadblock is preventing them from accessing one of the largest wild huckleberry patches in the region, right at the beginning of berry-picking season.

“It’s one of the main vessels that goes through our territory and that feeds into other parts of our territory, in which we harvest our plants and medicines and our berries,” said Wilp spokesperson Pansy Wright-Simms in an interview with CFTK-TV.

“That’s our basket of sustenance, and we just feel like our legs have been chopped off. It's prime time for us to be doing the work that we need to be doing in order to prepare for the winter.”

Wright-Simms says the Wilp had been in conversation with the province about their concerns with the road's conditions, but the province didn’t warn or consult with them about the current road closure or the digging of the trench.

“Who gave them the right to trespass onto our territory? Usually, you have to get consent to go into somebody else's traditional territory, and that consent wasn't sought.”

She said she phoned the Smithers office of the provincial Ministry of Forests, Lands, Natural Resource Operations and Rural Development (FLNRORD) to ask questions about the closure, but an employee there was allegedly not able to give her a timeline for when the road might be reopened.

“We're trying to deal with the trauma and recovery of Indigenous children whose lives were lost while forced to attend residential schools. The province is attempting to cut us off from our LaxYip (traditional territory), and I want to emphasize that we have always been here, way before government ever had any ability to try to control and bully us on our territories.”

A written statement from FLNRORD says signage was posted at both ends of the road in June 2021 notifying users that the road was closed. It says the closure occurred to ensure public safety and address environmental risk.

“Not proceeding with the road closure would cause a significant amount of liability to the Province as this road was being used on a regular basis,” reads the statement.

“Ample notice of these issues and of the closure was provided to the Luutkudwiiwus, Djogasleeto, and to the Gixtsan House Group in question, and a negotiated outcome to address them was sought.”

The statement says the province has been willing to fix the road’s issues, but the Gitxsan house group was unwilling to remove an unauthorized gate it has installed at the road’s 15km mark to enable this.

“The work to re-open the road could occur at any time however this is contingent on the house consenting to it and supporting this through the removal of their unauthorized gate.”

A press release from the Wilp Luutkudziiwus regarding the road closure says the Wilp manages traffic with a gate at the Suskwa River bridge during berry-picking season and has representative onsite to open and close the gate for those who need access. The Wilp suspects the province used a network of backroads to access the site.

The ministry's statement also says access to the Wilp’s traditional territory is still available through the Suskwa FSR by 4X4 ATV or by foot. The Ministry also lists the 456 road connecting the Suskwa 5500 road at 55km on the Suskwa down to approximately 36km as an alternative route.