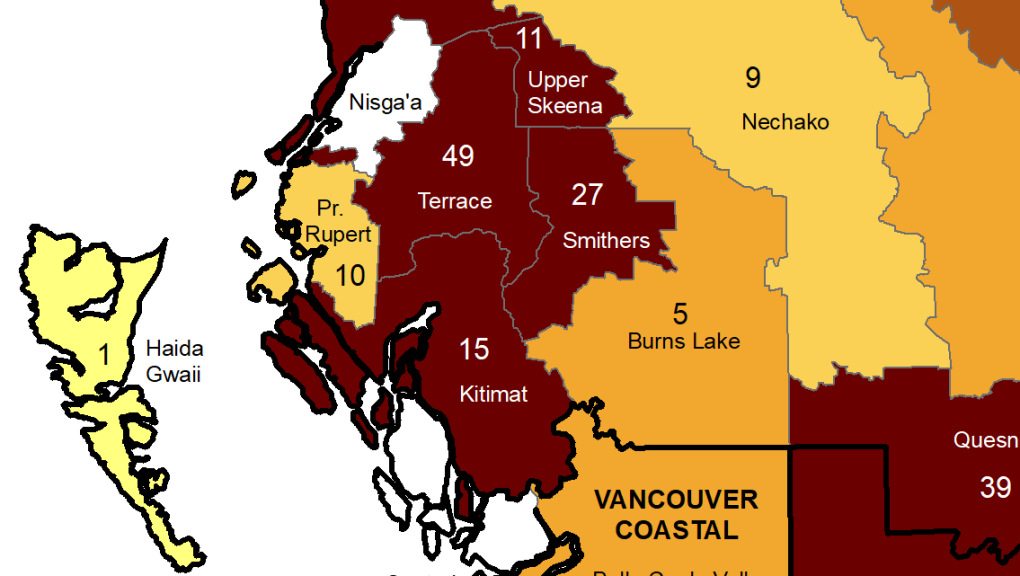 PRINCE RUPERT, B.C. -- After a recent spike in cases, the BC Centre for Disease Control says new COVID-19 cases in Terrace dropped by almost half last week.

Despite the drop, Terrace still has one of the highest infection rates in the North.

Other regions with high per capita case rates include Smithers with 27 new cases; Kitimat with 15; Upper Skeena with 11 and the Snow Country – Stikine – Telegraph Creek aggregate with one.

Areas with lower infection rates include Prince Rupert with ten new cases; Burns Lake with five; Nechako with nine and Haida Gwaii with one.

This week’s COVID-19 numbers also saw some good news for one of the hardest-hit regions in the North throughout the pandemic: Nisga’a recorded zero new cases last week.

The BCCDC says 95 per cent of Kitimat residents have had two doses of vaccine.

The first-dose rates for these regions are all at 90 per cent or higher.

In the Bulkley Valley and Lakes District, 75 per cent of Smithers residents are fully vaccinated

73 per cent of Burns Lake residents are fully vaccinated. In Nechako, that rate is 70 per cent.

First dose rates for these three regions are between 76 to 81 per cent.