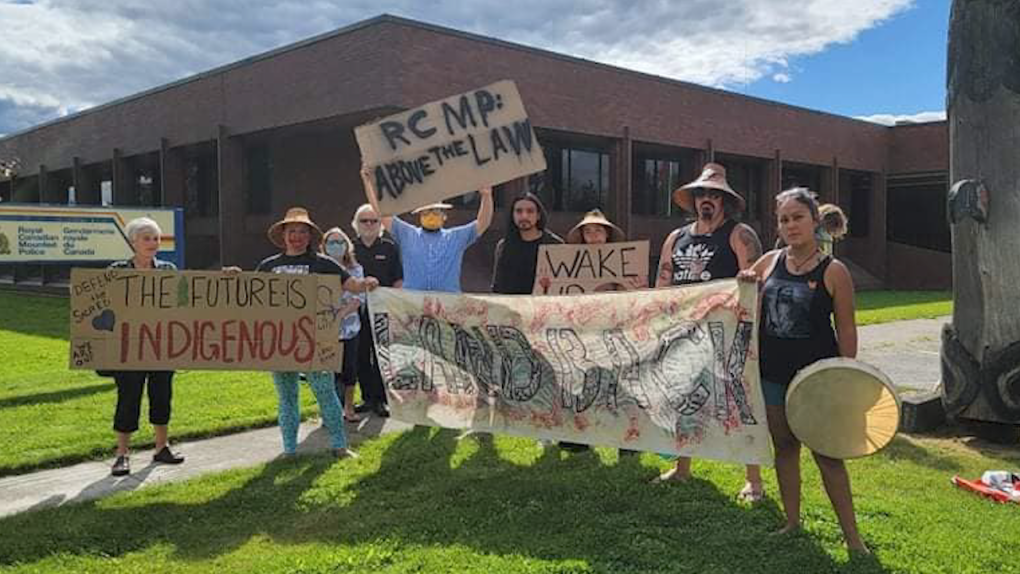 PRINCE RUPERT, B.C. -- A group of protestors held a demonstration at the Terrace RCMP building on Monday to protest alleged police violence at the Fairy Creek watershed on Vancouver Island.

Protestors have claimed that RCMP officers in Fairy Creek are violently targeting peaceful activists. The RCMP came under fire recently after video circulated of police using pepper spray on protestors, sparking several protests across the province.

The demonstration in Terrace was led by the local, Indigenous-led group Matriarchs in Training.

Protestors walked up to the building's entrance, where they approached a police officer standing outside.

Group member Hillary Lightening told the officer they're joining a province-wide request to ask the RCMP to stand down. She asked the officer to comment on the police's actions on Vancouver Island.

"The RCMP’s core values are supposed to be integrity, honesty and professionalism, and from the footage we've seen from land defenders and the independent media, the actions of the RCMP have been anything but,” she said.

"As a local detachment, we're challenging you to speak out against these actions and to demand better from your fellow officers. Violence against Indigenous people is endemic with our relationship with the RCMP, and I want to know how you guys, as a local detachment, plan on changing that systemically."

However, the officer declined to comment on the matter and told the protestors to reach the detachment's media liaison, who he said was not available at the time.

Nearly 800 protestors opposed to the removal of old growth trees in the Fairy Creek Watershed have been arrested for defying a court injunction issued in May. MP's from the New Democratic Party have also called on federal public safety minister Bill Blair to investigate the RCMP's actions at the watershed.