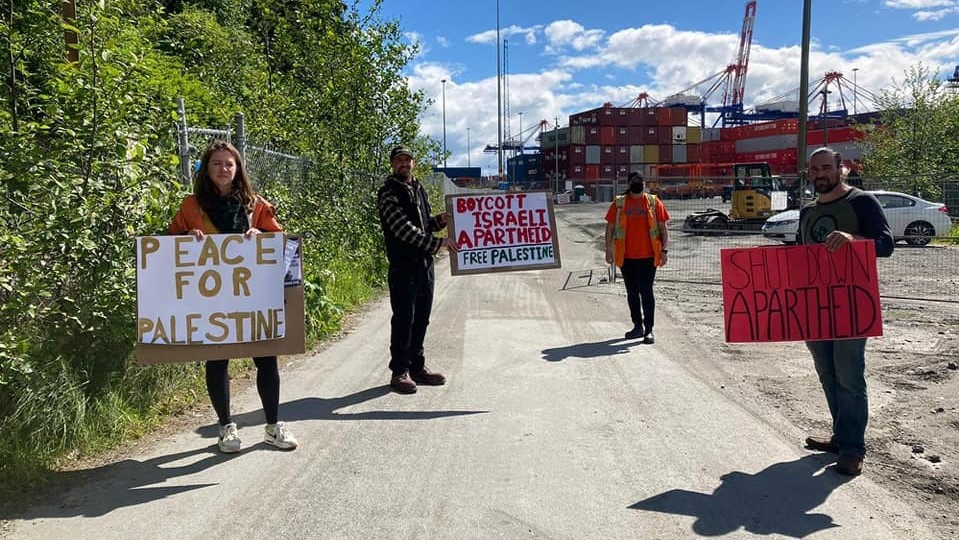 PRINCE RUPERT, B.C. -- A conflict is brewing at the Prince Rupert port over an Israeli container ship.

On Monday afternoon, activists from the Ad Hoc Prince Rupert Palestine Solidarity Committee formed a picket line at the Fairview Container Terminal to discourage port workers from docking the Volans ship, which is owned by the Israeli cargo shipping company ZIM.

The ship had tried to dock in Oakland last week, but protestors set up a picket line that unionized longshore workers wouldn't cross.

Workers in Prince Rupert wouldn't cross the picket line either, and the ship was unable to dock.

Rasha El-Endari, one of the organizers of the protest, says she wanted the port to turn the ship away in a show of support for the Palestinian people in light of the recent violence between Israel and Palestine.

That conflict saw 13 deaths in Israel, but at least 256 deaths in the Palestinian territory of Gaza.

El-Endari says the protest on Monday was quite peaceful. She says many of the port workers -- who are represented the International Longshore Workers Union Local 505 -- approached them and expressed their support.

"Many of the workers told us, 'we are happy you are here because we didn't want to tie that ship,’” she said. “Many of them said, 'if we could make a small change and put pressure on the government to change, why not?'"

However, the protestors’ success was short-lived. According to MyShipTracking.com, the Volans ship arrived at the Prince Rupert port at 3:37 p.m. PST and was moored at 3:45 p.m. PST. El-Endari told CFTK-TV News she had caught word the ship had docked as well.

CFTK has reached out to the Prince Rupert Port Authority, the International Longshore Worker's Union Local 505, ZIM Integrated Shipping Services and DP World – which operates the Fairview Container Terminal – for comment, but so far has not received a response from any of them.