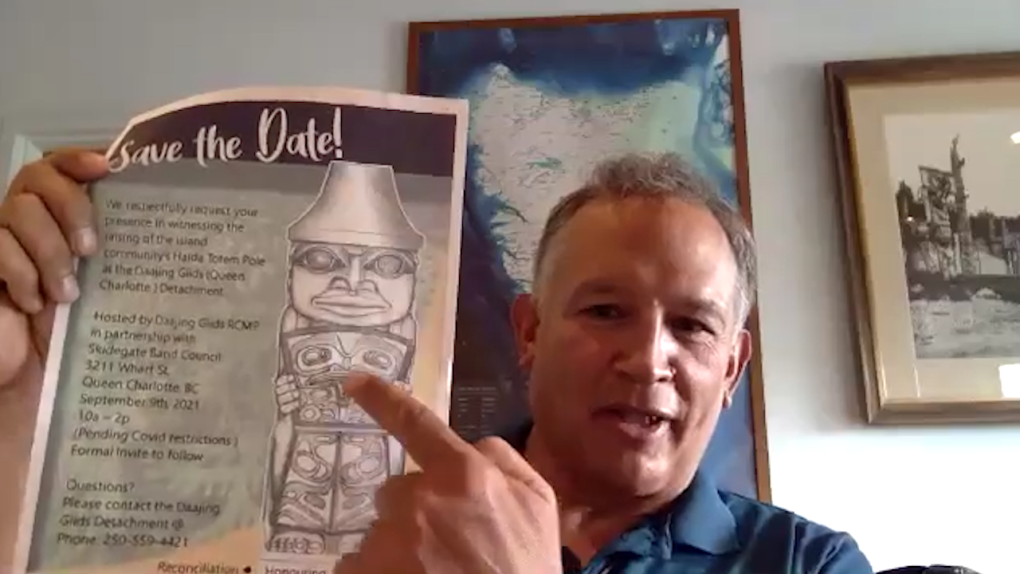 Skidegate Chief Councillor Billy Yovanovich describes a drawing of the upcoming totem pole that will be raised outside the Queen Charlotte RCMP detachment this week.

PRINCE RUPERT, B.C. -- The Queen Charlotte RCMP is partnering with the Skidegate Band Council and the Council of the Haida Nation for the raising of a Haida totem pole outside the detachment's office this week.

Queen Charlotte RCMP detachment commander Greg Willcocks says the pole is being raised in the spirit of reconciliation, and that the detachment wants to be more welcoming to the community it serves.

“If somebody is in trouble, we want them to be able to be comfortable and come to the police and tell us that there is an issue,” he said.

“We're also raising the Council of the Haida Nation flag as well to represent that we are on traditional Haida territory, and we also have a carved ‘welcome’ sign that's actually in Haida at the beginning of the detachment. So we're doing everything we can to make this more inclusive of the community that we serve and make people more comfortable when coming and seeing us.”

Skidegate Chief Councillor Billy Yovanovich says the eight-foot-tall pole is made out of red cedar. He says it took the team behind it about five month to complete.

Some of its features include a copper shield with an eagle and raven on it, an RCMP-style Stetson hat, and pink fingernails to represent the LGBTQ community.

Yovanovich describes the pole as a positive step in the right direction.

"It’s a good step to show our Haida members when they go there that there is acknowledgement of Haida people on Haida Gwaii and that they are serious about making steps towards reconciliation – and to get to help ease the stigma that the police are against us here, when they're actually here to help us,” he said.

“We're hoping that's going to make people feel a lot more comfortable when they go there."

The pole itself was carved by Garner Moody, who worked alongside a number of apprentices on the project.

A ceremony for the unveiling of the totem pole will take place this Thursday at the Queen Charlotte RCMP detachment from 10 a.m. to 2 p.m.